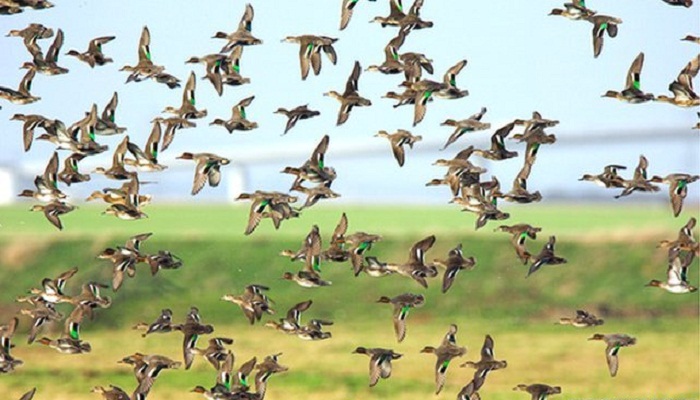 Migratory birds may be spreading viruses that cause bird flu around the world, say scientists.
Outbreaks in poultry may become more common in the future, especially in ill-prepared countries, they warn.
A severe strain found at a duck farm in the UK last year may have been carried by wild birds out of Russia, according to Dutch researchers.
The virus is a low human health risk, but wild birds on long migratory routes should be monitored, they say.
H5N8 is a strain of bird flu that appeared late last year in Russia, East Asia, North America and four European countries, including the UK.
The infections led to millions of poultry being culled.
In the UK, ducks were affected at a farm in Driffield, Yorkshire. Another outbreak of bird flu in Hampshire this week is of the H7N7 form of the virus, which is less severe.
Scientists at the Erasmus Medical Center in Rotterdam, Netherlands, say the presence of the H5 virus in a migratory bird in Russia and other detections in wild birds and poultry is “worrisome”.
“More poultry outbreaks could occur in the future, especially in countries that are ill-prepared,” a team led by Dr Ron Fouchier wrote in the journal, Science.
“Despite the currently low public health risk, the outbreaks should be monitored closely, given that several animal species are susceptible and that influenza viruses are generally unpredictable.”
Wild birds with long migratory routes should be monitored for exposure to H5N8 and control measures in poultry should be updated, as they appear to be “insufficient”, they added.
Scientists are also investigating other ways that bird flu viruses can spread around the world, including through illegal poultry trade and contamination of vehicles or equipment.
A recent report from the European Food Safety Authority said the route of spread of the disease remained uncertain.
It said all affected farms in Europe had kept birds inside, suggesting direct transmission from wild birds to farmed poultry was unlikely.
Experts said there were no known direct migration routes from East Asia to Europe, but infected migratory birds from East Asia could in theory pass the virus on to other species at breeding and stopover places in Eurasia.
Dr Derek Gatherer of Lancaster University said more research into flu in wild bird populations in the UK was needed, especially in species migrating in from Europe.
“The British response to bird flu is oriented towards agriculture - that’s fine because of course we need to protect our poultry industry - but in order to really understand bird flu we should also study it in its natural setting,” he told BBC News.
“Then we’ll have a better ‘early warning system’ for what might be a threat to agriculture in the future.”
UK officials said tests had confirmed the Hampshire outbreak was of a low severity H7 strain of the disease, which is a much less severe form than the H5N8 strain found in Yorkshire in November.
Chief vet Nigel Gibbens said: “We have taken immediate action to contain this outbreak as part of our robust procedures for dealing swiftly with avian flu.
“This is a low severity form of the virus and we are taking action to ensure that the disease does not spread or develop into a more severe form. We are investigating the possible sources of the outbreak.
“I would urge poultry keepers in the surrounding area to be vigilant for any signs of disease and to ensure they are maintaining good biosecurity on their premises.”
The Department for Environment, Food & Rural Affairs said warden patrols for diseased wild birds occurred in eight Wildfowl and Wetlands Trust reserves in Great Britain, and a number of other reserves were patrolled by volunteers from October to March.