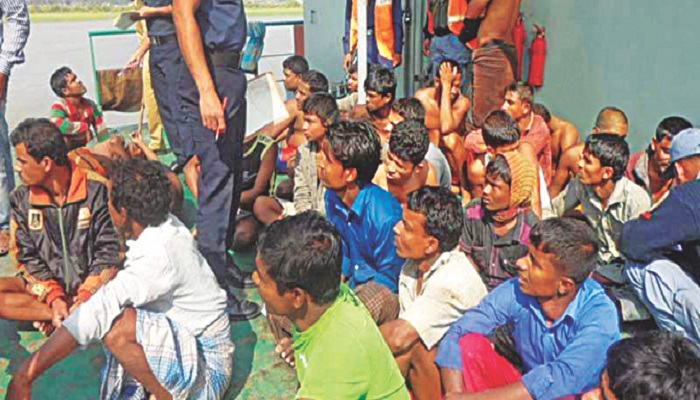 A number of the survivers in the accident

Eight more bodies of overseas jobseekers were found in the Kutubdia coast in the Bay of Bengal at 12:30pm on Friday.
Earlier, a fishing trawler with about 100 people on board capsized at the Kutubdia coast in the Bay of Bengal on Thursday morning.
Bangladesh Coast Guard and police have so far rescued 51victims, including three alleged human traffickers, in several phases, sources said.
The vessel was pulled out of water but there was no one inside it, said Lieutenant Commander Fazlul Karim, operation officer of the coast guard (East zone).
Police said 15 to 20 passengers remained missing while coast guard claimed that 50 people are still missing.
Of the rescued, the biggest group of 14 came from Jessore and others, in groups ranging from two to seven came from Narayanganj, Bogra, Cox's Bazaar, Narsingdi, Madaripur and Naogaon.