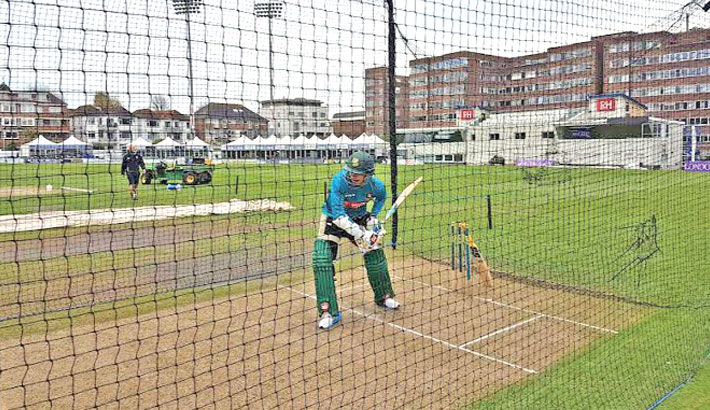 Bangladesh Batsman Soumya Sarkar practicing in the nets ahead of the Tri-Nation Series and ICC Champions Trohy at Sussex Central Cricket Ground on Saturday. - BCB PHOTO

Champions trophy is only a month away, before that a Tri-Nation series is to be held in Ireland against the home team and New Zealand. This series is scheduled to start on 12th May which is just 2 weeks from now. Keeping that in mind Bangladesh team is training hard to accustom themselves to the English conditions. In order to acclimatize with the conditions the tigers are currently training in Sussex County Cricket Club’s practice grounds.

Bangladesh Cricket team left Dhaka for London at 00:45 am on 26th April. After a brief transit in Dubai followed by long air flight Mashrafe Bin Mortaza and the team reached London on afternoon of  27th April. Tigers were sanctioned a day off to cope with jet lag as they started training from Friday in Sussex’s Central Cricket ground’s both indoor and outdoor facilities.

BCB announced an 18 member team for ICC Champions Trophy and Tri-Nation series in Ireland. Among them 16 of them are currently in London. Due to commitments in IPL Speedstar Mustafizur Rahman and Allrounder Shakib Al Hasan will join the rest of the team on 5th may. Mustafizur is supposed to return to Bangladesh on 3rd and Shakib on 4th May from India. Both of them are scheduled to leave Dhaka for London later that day.

Sussex County Cricket Club officials are very pleased to be able to host Bangladesh training sessions. In a tweet they said, “We are delighted to be hosting BCBtigers for a training session ahead of their match with Duke of Norfolk XI.”

The Tigers had their practice sessions with bat-ball and including warm-up at County Cricket Ground on Saturday. Leaving home on April 26, Mashrafe Bin Mortaza’s men are now in at Brighton, Hilton Metropole on a preparation camp— involving two friendly matches— started on April 28.

The Tigers will play the 2nd friendly against Sussex XI Hove on May 7, before leaving for Belfast to play the Ireland Tri-Nation Series starting on May 12.