The 'silent crisis' of Rohingya refugees in Bangladesh 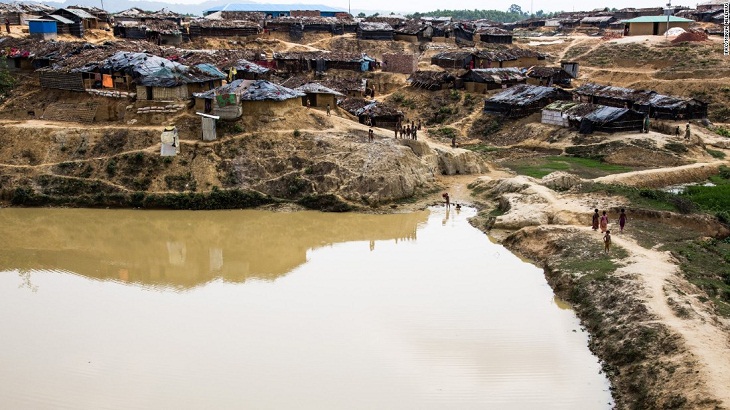 They say they ran from murder and persecution. They've ended up in mud huts on the Bay of Bengal.

And with the torrential rains of the monsoon season approaching, along with the threat of cyclones and floods, the fate of tens of thousands of Rohingya refugees living in overcrowded camps in Bangladesh looks as precarious as their makeshift shelters.

"It's becoming a silent crisis which does not have the international attention that it deserves, given the scale of the needs of the people and the uncertain future they are facing," says Ezekiel Simperingham, Asia Pacific Regional Migration Coordinator for the International Federation of Red Cross (IFRC).

New photographs of the refugees show only the fortunate have tarpaulins for a roof, the rest stretch black plastic over bamboo frames. Mats on the hard ground are beds.

"We are surviving mostly with some help from relatives. We would like to return, but it is not safe. Some of our neighbors were killed, and we had to flee to save our lives," he says.

Senuara, 27, says that four months ago she still lived in Rakhine and her due date was fast approaching, but the upsurge of violence forced her to flee to save the life of herself and her family. Soon after arriving, Senuara gave birth.

"It is very difficult for me to take care of my small baby here, because we don't have enough clean water to bathe her. We hardly have enough water for drinking," she said.

"Their shelters are not strong enough to withstand these extreme weather patterns," Simperingham says.

The UN estimates that 74,000 Rohingyas have crossed the border into Bangladesh since Myanmar began a military crackdown in northern Rakhine State following attacks on border guards on October 9 last year.

Many of those fleeing have made allegations of murder and rape by Myanmar's security forces inside Rakhine State.

Aung San Suu Kyi, Myanmar's State Counselor and de-facto leader, denied any ethnic cleansing in an interview with the BBC.

And while Bangladesh offers refuge, there is little else available for the Rohingya.

Aid agencies have been distributing food, tarpaulins and other essentials in the camps, but they are struggling to keep up with the demand.

"We barely have enough food to survive," Mohsena, a 22-year-old Rohingya mother living in a makeshift shelter in Bangladesh, said. "If we have a meal once, we don't know when we can have the next one. Feeding my children is my main concern."

An estimated one million Muslim Rohingyas live in Myanmar's northern Rakhine State, where they are a persecuted, stateless ethnic minority in the Buddhist-majority country, analysts say.

Most of the new arrivals to Bangladesh are living in makeshift shelters outside two United Nations-administered refugee camps, along with hundreds of thousands of other Rohingyas who were already there after fleeing previous spates of violence.

"We are hearing reports that 180 people are sharing one latrine," says Simperingham.

The Rohingyas were in a desperate situation even before the most recent round of violence broke out.

The aid group has now launched an urgent appeal for $3.2 million to help meet the needs of 25,000 of the most vulnerable people in the Bangladesh camps over the next nine months.

"People don't have enough food, enough water," Mirva Helenius, a photographer for the IFRC, tells CNN. "These people are living without any kind of status, and without any services."

Last week, Helenius traveled to refugee camps in and around Cox's Bazar, Bangladesh, to take photographs of the living conditions and gather testimonies from some of the families living there.

CNN cannot independently verify the stories of those who have arrived in Bangladesh, as access to media in Rakhine State is heavily restricted.

'Now, we have nothing'

Mohsena says she fled Myanmar, also known as Burma, three months ago with her 4-year-old son and 3-year-old daughter after her husband was killed.

Mohsena's son is disabled, which means she struggles to earn any income.

"Because my son can't walk or sit or eat, I have to stay close to him all the time," she says. "I got some money by begging. I don't know how we will survive after that money is gone."

There are thousands of families in the camps with stories just like Mohsena's, Helenius says.

Rabeya, 25, says she arrived in the Balukhali makeshift camp four months ago, fleeing Myanmar with her husband and children after she was attacked by a group of men.

"I lost consciousness because of the pain," she says. "My neighbors found me on the ground and dragged me to the jungle. I was bleeding a lot. All my clothes were torn."

Rabeya says she later miscarried a baby she was carrying. She also heard that her mother and sister had been killed.

"We had a wealthy and happy life there before," she says. "Now, we have nothing. We have to worry about surviving. We don't even have enough money for food."

In February, the United Nations released a report that alleged widespread brutal killings and rapes taking place inside Rakhine State, and in March, the UN Human Rights Council in Geneva announced that an "urgent" fact-finding mission will be sent to Myanmar to investigate the claims of human rights abuses.

Nobel Prize Winner Aung San Suu Kyi insisted that those who fled Myanmar are "safe" to come back, adding that "we will welcome them back."

But in Bangladesh, the future for the Rohingya refugees is still looking increasingly uncertain.

"My first priority is the safety of my family," Rabeya says. "If peace returns to our home, if it is safe for us to be there, we want to go back. But if not, how can we survive here?"