Friendship is a flowing river 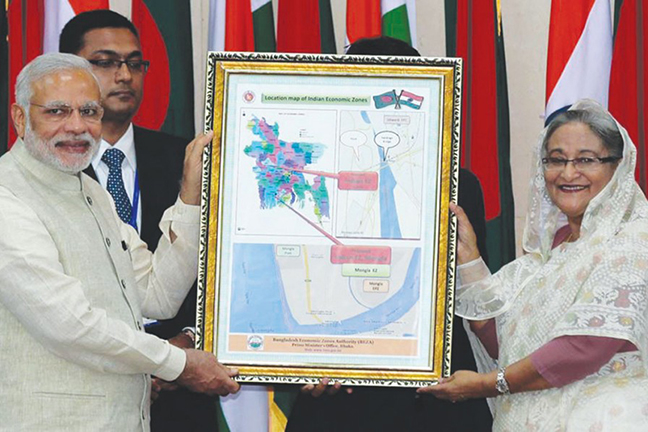 If our commitments are honest, India and Bangladesh can achieve many things that are beneficial to our people.

Maintenance of good relations with the neighbours, friendship to all, malice to none — is the policy I pursue throughout my life. My only desire in my political thought is to build a society for common people where none will suffer from the curse of poverty while their basic needs will be met. In other words, they will get the opportunity to have the right to food, clothing, shelter, medicare, education, improved livelihood and a decent life.

I received the teaching of such sacrifice from my father. My father, Father of the Nation, Bangabandhu Sheikh Mujibur Rahman, did his politics with a motto to change the lot of the people. Wherever there was an injustice, he would protest it. This was the policy of Bangabandhu and he was always vocal for establishing the rights of the people. And, for that reason, he had to embrace imprisonment time and again and endure persecution. But he remained firm on the question of principle. Bangladesh earned its independence under his leadership.

The support and cooperation of neighbouring and friendly countries had accelerated our goal to earn the independence of Bangladesh. Among those, India played the leading role.

The Pakistani military junta started a genocide launching armed attacks on the innocent Bangalees on March 25, 1971.

In the 1970 general elections, people of Bangladesh voted for Bangladesh Awami League and made it the majority party. This is for the first time that Bangalees had got the mandate to rule Pakistan. Although the population of East Bengal constituted the majority in Pakistan, the Bangalee nation was subjected to oppression and subjugation all the time, and deprived of its rights. The nation was about to lose its right to speak in the mother tongue. It was unthinkable to the military rulers that the Bangalee nation would ascend to state power and that was why they imposed the uneven war on Bangalees.

With the people’s mandate, the Father of the Nation declared the independence of Bangladesh and directed the people to carry on the war of liberation. Responding to his call, the people of Bangladesh took arms and the liberation war began. The Pakistani rulers and their local collaborators engaged in committing genocide, rape, looting, arson and attacked the innocent people of Bangladesh. The world woke up. People and the Government of India stood beside the oppressed humanity. They gave food and shelter to nearly 10 million refugees of Bangladesh. They extended all-out cooperation in our great liberation war and played an important role in creating global opinion in favour of Bangladesh. This helped us to earn victory and the country was freed from enemy occupation.

We are grateful to the friendly people of India. The Indian government had played an important role even in getting Bangabandhu released from the Pakistani prison. Shrimati Indira Gandhi had played the leading role in earning our independence, freedom of Bangabandhu and bringing him back to his beloved people. We got her government, political parties and above all the people of India beside us during our hard times.

The killers brutally assassinated the Father of the Nation on August 15, 1975. I lost 18 of my family members, including my mother, three brothers and sister-in-laws. I, along with my younger sister Rehana, survived as we were abroad. In our bad days, India again stood beside us. I could not come back home for six long years. The Bangladesh Awami League elected me its president in my absence. I returned home with the support of the people.

On my return, I started a movement for the restoration of people’s basic rights and democracy. We formed the government in 1996 after 21 years. I got the opportunity to work for the people. I devoted myself to the task of welfare of my countrymen not as a ruler but as a servant. My father got the opportunity to build the war-ravaged country for only three and a half years. And I got the chance to serve the people after 21 years.

During that time, the people of Bangladesh realised that the objective of a government is to accomplish the task of people’s welfare. We signed the Chittagong Hill Tracts Peace Treaty ending the two-decade-long conflict. We brought back 62,000 refugees from India and rehabilitated them in the country. We signed the Ganges Water Sharing Treaty with India. The country’s image brightened in the outside world.

A five-year period is too short for the development of any country. We couldn’t win the election of 2001. The Bangladesh Nationalist Party-Jamaat-e-Islami assumed state power and destroyed all our achievements. Again, the country’s progress suffered a setback. Militancy, terrorism, corruption and misrule made people’s life miserable. The country became champions in the corruption index five times. The minority community became victims of torture. The country’s socio-economic development had been stalled. The Awami League leaders and workers became targets of persecution. Bangladesh once again fell under emergency rule. We demanded restoration of democracy. We faced jail, torture and false cases. But finally, people triumphed.

The national election was held after seven years in 2008. Winning the election, we formed the government. We started implementation of a Five Year Plan and 10-year-long Poverty Reduction Strategy Plan. We have been working to turn Bangladesh into a middle-income country by 2021 and a developed one by 2041. The people of Bangladesh started getting the benefit of it.

Bangladesh is marching ahead. We earned over 7.1% GDP growth. Inflation is contained within 5.28% and the poverty rate has been reduced to 22%. At this moment, on many socio-economic indicators, Bangladesh’s standing is better than many other South Asian nations whereas a few years ago our position was at the bottom. But we still have a long way to go to ensure prosperity of the people. And we are working towards that end.

My objective is to fulfil the dream of Bangabandhu through building a hunger- and poverty-free Golden Bangladesh being imbued with the spirit of the War of Liberation.

I always refer to poverty as the main enemy of this region. A large number of people of Bangladesh and India suffer from malnutrition. They are deprived of their basic needs. Lack of nutrition is impeding the growth of a huge number of children. They don’t have proper medicare and schooling. We have to change this scenario. We have the ability. The only thing we need is to change our mentality. I think eradication of poverty should be the first and foremost priority of our political leaders. And, in today’s globalised world, it is difficult to do something in isolation. Rather, collaboration and cooperation can make many things easier. That is why I always put emphasis on regional cooperation and improved connectivity.

I believe in peace. Only peaceful co-existence can ensure peace. There are some issues between us. But I believe that any problem can be resolved in a peaceful manner. We have demonstrated our willpower through the implementation of the Land Boundary Agreement. There are some more issues like sharing of waters of the common rivers (the Teesta issue is currently under discussion) that need to be resolved. I’m an optimistic person. I would like to rest my trust on the goodwill of the great people and the leaders of our neighbour. I know resources are scarce, but we can share those for the benefit of the people of both countries. We share the same culture and heritage. There are a lot of commonalities (at least with West Bengal). We share our Lalon, Rabindranath, Kazi Nazrul, Jibanananda; there is similarity in our language, we are nourished by the waters of the Padma, Brahmaputra, Teesta; and so on. The Sundarbans is our common pride. We don’t have any strife over it. Then, why should there be any contention over the waters of common rivers?

Our foreign policy’s core dictum is: ‘Friendship to all, malice to none.’ The Father of the Nation, Bangabandhu Sheikh Mujibur Rahman, defined the policy. We are also inspired from his words: “The very struggle of Bangladesh symbolised the universal struggle for peace and justice. It was, therefore, only natural that Bangladesh, from its very inception, should stand firmly by the side of the oppressed people of the world.” At international forums, we support all international efforts towards building a just and peaceful world.

In recent years, especially after 2009, when my party assumed office, cooperation between Bangladesh and India has been bolstered manifold. Rail, road, and waterway connectivity boosted. Trade, commerce and investment maximised. People-to-people contact also got momentum. Such mutual cooperation is definitely benefitting our people. Relations, at a personal or national level, largely depend on give-and-take measures. Mexican Nobel Laureate Octavio said ‘Friendship is a river’. I think that the friendship between Bangladesh and India is like a flowing river and full with generosity. This is the spirit of the people of the two neighbours. I think if our commitments are honest, we would be able to achieve many things that are beneficial to our people. On the eve of my four-day visit to India, I myself, and on behalf of my countrymen, would like to convey the heartiest greetings to the people of India. I hope that the cooperative relations between Bangladesh and India would reach a new height through my visit.

Sheikh Hasina writes the article for for The Hindu