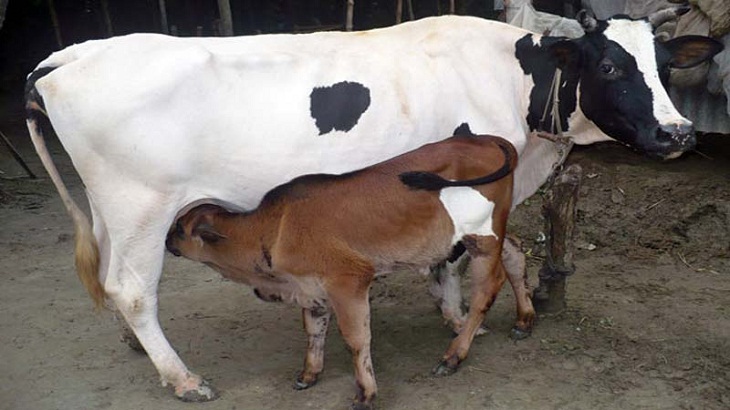 Sakhina Begum, a mother of two daughters, who experienced severe economic hardship several years back has now set an example of successful woman in her village by overcoming her financial crisis through dairy cow farming.

Sakhina got married with one Asad Ali of same village on the bank of river Teesta at the age of 14. Her parents arranged the marriage at the early age without bothering the consequences of 'Child Marriage Prevention Law'.

But, within one year she gave birth of her first baby girl. Now Sakhina is the mother of two daughters. Her husband Asad Ali, a day labourer, was trying hard to arrange bread and butter for his four-member family. But, it was so difficult to run the family smoothly by his lone income.

Driven by abject poverty, once Asad Ali came to Dhaka with a dream to earn more by pulling rickshaw with a view to change his economic condition and keeping of his two daughter's studies continue. After few years, Sakhina's elder daughter got admitted in Mathematics honours in Rangpur Carmichael College and younger one in class eight in a local school.

Since, her two daughters are meritorious, Sakhina vowed to keep continue of their studies at any cost. But, how she will bear expenses of her two daughter's by depending only of her husband's limited income?

She was seemed depressed. She became concern about her daughters study. She started thinking how she can contribute to his family to help his husband.

But, all on a sudden, Sakhina was introduced with an officer of Re-call project when Sakhina sought his suggestion how she can contribute to her husband's earnings. The officer suggested her to raise dairy cow farming. Once she got a cow and the cow gave birth of a calf after a few months.

Then the cow started giving five to six liters of milk every day. By selling this milk, Sakhina used to save Taka 1500-2000 each month. She later procured two more developed species of cows by the money she deposited.