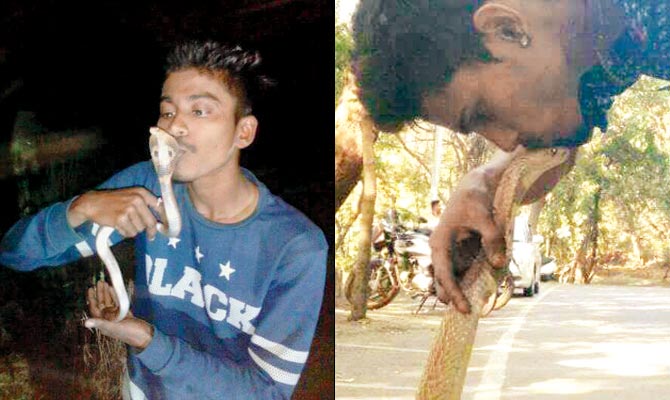 India’s snake rescuer Somnath Mhatre's name will go down in history books. Not for rescuing a prized cobra, but for dying of a bite from the reptile while kissing its head for a photo-op. Mhatre is the 31st snake rescuer to die in the last 12 years from the snakebite he suffered while performing the oft-repeated pecking stunt.

Activists are now calling on the Forest Department (FD) to issue guidelines to prevent such incidents and take action against those involved in performing and posting pictures of such stunts.

Somnath, a resident of CBD Belapur in Navi Mumbai of India, died of the bite on February 2. A snake rescuer from the area said, "As per the information told to us by his friend, Somnath had gone to rescue a snake from a car at CBD Belapur, but after rescuing the cobra he took it to another location where he was trying to attempt the act of kissing the cobra on its head, when suddenly, the snake turned and bit Somnath on his chest."

Before Somnath, another rescuer from Satara died after suffering a snake bite while he was trying to kiss a cobra. According to another snake rescuer, Somnath was hospitalised for five days at a hospital in Navi Mumbai. He'd rescued more than 100 venomous snakes in the past.