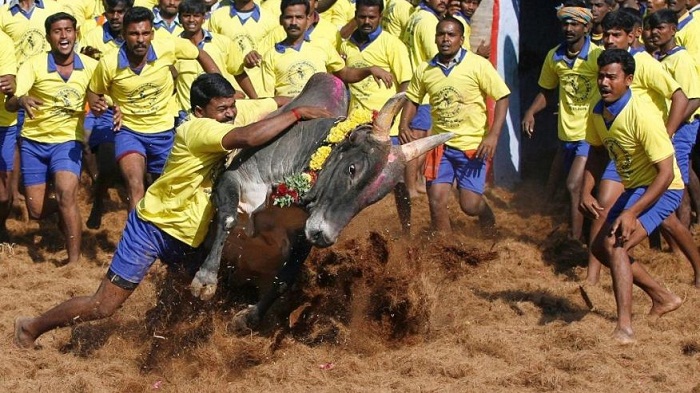 NEW DELHI: Thousands of people were camping on a beach in southern India on Wednesday demanding a ban be lifted on the traditional sport of bull-taming.

The sport of jallikattu involves releasing a bull into a crowd of people who attempt to grab it and ride it. It is popular in Tamil Nadu state but was banned by India's top court in 2014 after animal rights groups argued it was cruel to the animals.

Thousands of protesters wanting the sport resumed gathered on the Marina beach in Chennai, the state capital, on Tuesday night, and the crowd swelled further on Wednesday in response to appeals on social media.

The annual contests involving tens of thousands of participants would have been held last week during the four-day "Pongal" marking the winter harvest.

The protesters want the federal and state governments to petition the court to review its decision. They say they would support changes to make the sport safer.

"Jallikattu is our pride," said actor-turned politician Khushboo, who uses one name.

The state's top elected official, O. Paneerselvam, said in a statement he would meet with Prime Minister Narendra Modi on Thursday to find a way to meet the people's demand.

Animal rights activists including PETA India have protested the sport, which has involved injuries to animals as well as injuries and fatalities of people.

Sadhguru Jaggi Vasudeva, a spiritual leader, said "this is a celebratory kind of festival dedicated to animals. You should not take away the cultural strength of people, especially in rural areas."

Vasudeva said money has brought in evils like people betting on the bulls. "But that can be controlled."