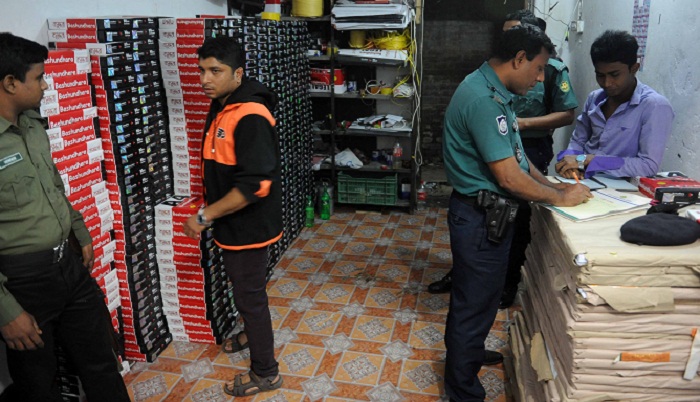 A factory, which was producing and marketing fake paper as Bashundhara Paper, was unearthed at Ashek lane in Islampur area of the capital on Monday.

With the help of the police, a team of three officials of Bashundhara Paper, led by AKM Manirujjaman, conducted a drive and busted the fake factory.

During the period, they caught a factory employee, Nayan, red-handed and seized a huge quantity of paper and paper-making materials from there.

Sources said the factory was doing the business, faking all logos, package and trademarks of Bashundhara Paper for the last seven to eight months.

The illegal factory was producing and marketing fake paper in the name of Bashundhara Paper which is the most popular paper brand of the country.

AKM Monirujjaman said they got information that Bashundhara Paper of Bashundhara Group is being faked. They have collected a proper address when the fake factory was open.

“We could not hold the owner. Even Nayan doesn’t know the owner. The factory workers work at night, distribute paper at dawn and keep it closed at daytime,” he added.

He informed said the factory was located at a narrow lane. May be, there is another fake factory near it.

Monirujjaman suspected that there have a big gang working behind faking Bashundhara Paper. Some of them produce cartons, some produce label while another gang prints the paper. All the works are being done in separate places.

They are taking preparations for filing a case against the culprits with the Kotwali police station in the capital.