Bangladesh to give priority to climate-induced migrant in Morocco Summit 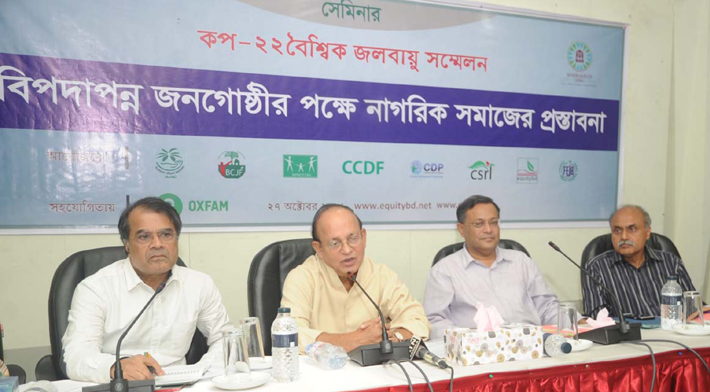 Chairman of the Parliamentary Standing Committee on Environment and Forests Ministry Dr Hasan Mahmud on Thursday said the issue of climate-induced migrant will get priority in Marrakech climate conference billed for November 7-18.

“The government’s policy is to give highest priority to climate-induced migrant issue in this conference,” he told a seminar titled ‘CoP 22 Global Climate Conference: Proposal from Civil Society on Behalf of Most Vulnerable Population’ held at the Cirdap auditorium in the city.

Environment and Forests Minister Anwar Hossain Monju was present as the chief guest at the seminar organised by eight rights groups, including BAPA, BCJF, BIPNetCCBD, CDP, CSRL, EquityBD and FEJB.

Chaired by Dr Hasan Mahmud, the seminar was addressed, among others by Director of the Department of Environment Md Ziaul Haque, Dr Nilufar Banu of BUP, Qumrul Islam Chowdhury of FEJB, Kawser Rahman of BCJF and Mojahidul Islam Noyan of Oxfam.

Moderated by Rezaul Karim Chowdhury of EquityBD, Sharmind Neelormi of CSRL presented the keynote paper in the seminar.

In his speech, Dr Hasan Mahmud said the government is not in favour of any loan or any commercial attitude in climate finance as Bangladesh is not at all responsible for climate catastrophes. “So Bangladesh’s position is to demand compensation in this regard,” he said.

The government will also raise the issue of setting picking year in respect of temperature and mitigation, Dr Hassan Mahmud added.

Anwar Hossain Manju said the government and civil society should work together for country’s interest in Marrakech conference.