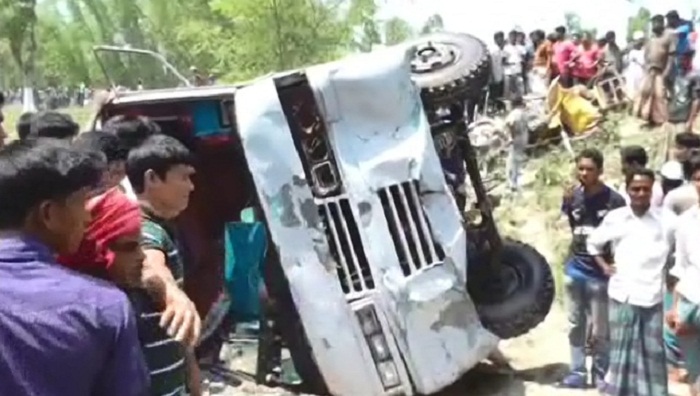 Police said three pedestrians, including a minor, were killed as they were crushed under the wheels of a truck on Lalmonirhat-Burimari road in Mirzar court area in Patgram municipality in the morning, UNB reports.

The deceased were identified as Delwar Hossain, 25, son of Amanat Ullah, Abdus Sattar, 27, son of Nazrul Islam, and Labib, 8, son of Faridul Islam, all residents of the area.

Obony Shangkar Kar, officer-in-charge of Patgram Police Station, said the Burimari-bound truck from Lalmonirhat ran over the trio in the area early in the morning, leaving Delwar and Labib dead on the spot and Sattar critically injured.

The injured were rushed to Rangpur Medical College Hospital where he succumbed to his injuries.

After the accident, the truck skidded off the road and overturned as it fell into a roadside ditch. The driver and helper managed to flee away.

In another incident, two unidentified motorcyclists were killed in a head-on-collision between two motorcycles on Rangpur-Kurigram highway at Borobari in Sadar upazila in the afternoon.