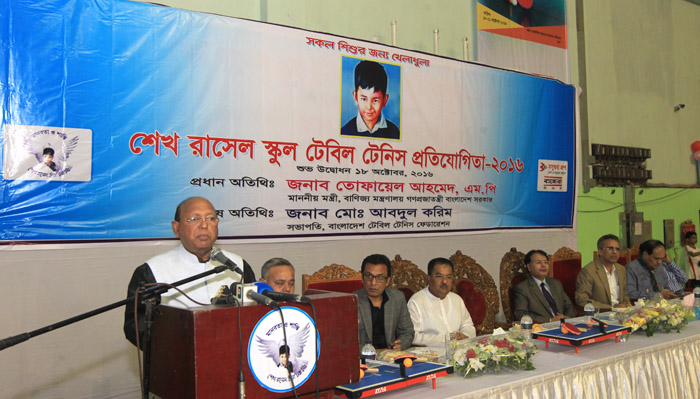 Sheikh Russel Krira Chakra, in association with Bangladesh Table Tennis Federation, is organising the tournament to mark the 52nd birth anniversary of Sheikh Russel, youngest son of father of the nation Bangabandhu Sheikh Mujibur Rahman. Country’s one of the largest conglomerates Bashundhara Group will patronize the tournament and Bashundhara Cement will sponsor the competition.

Commerce Minister Tofail Ahmed inaugurated the competition yesterday at 4:00 pm as chief guest and President of Bangladesh Table Tennis Federation (BTTF) Mohammad Abdul Karim was present as a special guest on the occasion.

Commerce Minister Tofail Ahmed said, “The competition carries a theme that is ‘Sports for Every Child’. I believe that different types of sports are the vital key for flourishing children mentally. This is the fundamental right of every child. I saw Sheikh Russel very closely.

Bangabandhu Sheikh Mujibur Rahman loved him very much. He also loved the children. I admire Sheikh Russel Krira Chakra Chairman and Managing Director of Bashundhara Group Sayem Sobhan Anvir for taking such wonderful initiatives for the children. I am very much glad to hear that twenty five specially disabled children have confirmed their participation in the competition.”

President of Bangladesh Table Tennis Federation (BTTF) Mohammad Abdul Karim said, “I believe that sports are the key that helps a child to be a complete man. In future we will take more initiatives for children if we will get the proper support from the government.”

Dhaka’s renowned schools and all of the district teams are taking part in the competition. 41 teams, 260 players are participating. Bashundhara Group is known for their participation in the sports arena of Bangladesh and patronizing sports to the mass people of the country.

All the matches will take place at Shahid Tajuddin Ahmed Indoor Stadium in Dhaka. The closing ceremony of this tournament will be held on October 21.