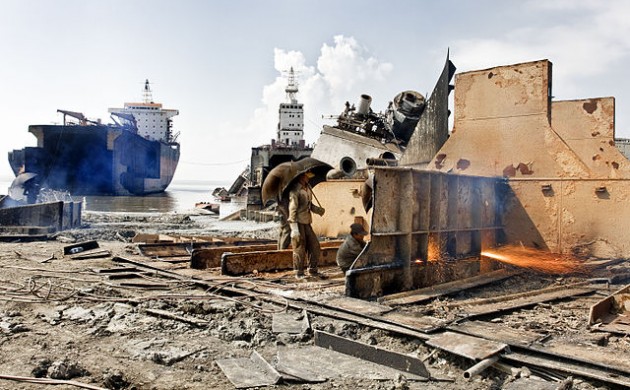 The scrap shipyard in Chittagong, Bangladesh is dangerous and dirty.

On the heels of the troubling affair concerning the oil tanker ‘North Sea Producer’, which after 32 years of service for Maersk is being scrapped at a notorious yard in Bangladesh, the Danish shipping company is changing course, according to Politiken.

Maersk now says that if a ship is no longer viable, it will take responsibility for getting it scrapped and not sell it. This will ensure that the dismantling occurs according to Maersk’s own rules on ship recycling that take into account worker safety, the environment and the risk of corruption.

When the dismantling takes place on an open beach, as is the case in India and Bangladesh, where ships are disassembled by hand by workers without safety equipment, there is a high risk of serious accidents.

This year alone, 17 workers at Chittagong Beach in Bangladesh have been killed while scrapping ships. The process also pollutes the seas with oil and other toxins from the ship.

It is under circumstances like those that workers in Bangladesh are currently dismantling the ‘North Sea Producer’. The ship was in Maersk’s service until it was sold in April of this year and wound up on the beach in Bangladesh last August.

Maersk admits that it currently has no control over the dispensation of its former ship. As a direct consequence, Maersk has introduced new rules.
When Maersk sells a ship from here on out, the value of continuing to sail the ship is weighed against the potential net benefits of scrapping it.

If the ship is so worn that the potential financial gain of keeping it in service is less than 25 percent of the scrap value, then Maersk will not sell it, but take responsibility for the ship being scrapped by the company’s rules.