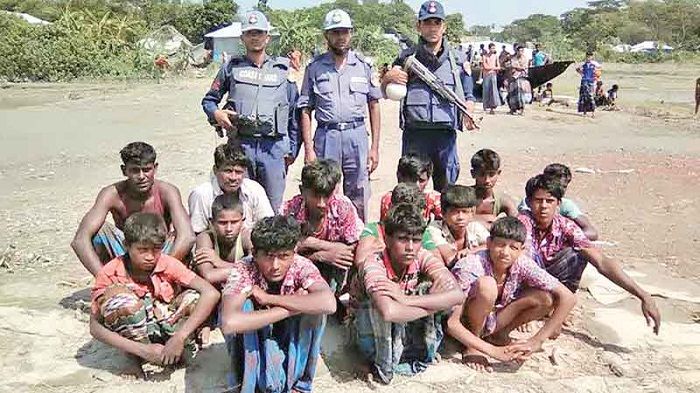 In Bhola, a mobile court sentenced four fishermen to one year’s imprisonment and three others to 18 days’ one in Sadar and Charfasson upazilas for catching hilsa in the Meghna River.

A joint team of Bangladesh Coast Guard and district Department of Fisheries office conducted drives in different areas of the two upazilas in the river and arrested 10 fishermen, including a minor boy, said M Asaduzzaman, a senior fisheries official in Sadar upazila.

The team also seized 6000 metres of current net and 20 kg of hilsa.

Later, they were produced before the mobile court, led by executive magistrate Md Kamal Hossain, which sentenced the fishermen to different jail terms.

The court also fined Tk 5,000 to two fishermen, who were arrested from Charfasson upazila. However, the mobile court released the minor boy.

In Rajbari, a mobile court fined two fishermen Tk 1000 each for catching hilsa in the Padma River in Goalanda upazila.

Meanwhile, a joint team of police and the Department of Fisheries in a drive seized 15,000 metres of current net from different rivers in Mongla, Morelganj and Sharankhola upazilas in Bagerhat district from Thursday evening to Friday noon.

The teams also recovered 98 kg of hilsa and 1.31 lakh metres of illegal current net during the drives.

The government has imposed a ban on catching, selling, transportation and hoarding of hilsa from October 12 to November 2 in 27 districts.

The decision was taken at a meeting of Fisheries and Livestock Ministry at the secretariat on October 2 to boost hilsa production through protection of mother fish during its peak breeding season.