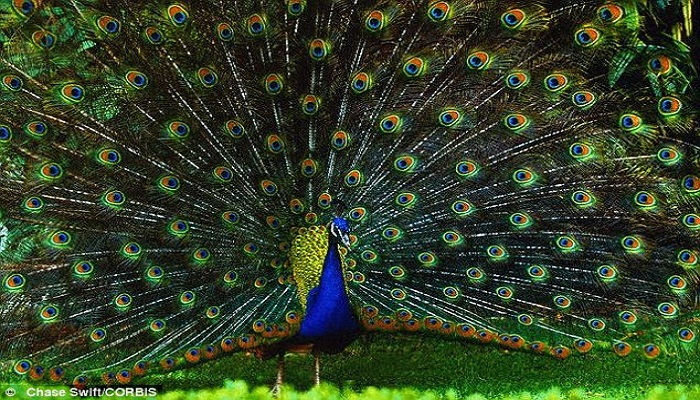 The iridescent eyespot effectively hypnotises the female, leaving her powerless to resist the male's attentions.

A male peacock, for example, entices peahens by raising and vibrating his long train feathers.

The vibrations both make the feathers rattle and make the brightly coloured eyespots appear to hover motionless against an oscillating iridescent background, reports Ians.

The findings, published in the journal PLOS ONE, showed that displaying peacocks vibrate their feathers at or near resonance, giving the train the greatest vibrational amplitude and suggesting that these courtship displays may be energetically efficient.

The courtship displays signals the relative physical quality of males vying for females.

Males with eyespots that are the most iridescent win most of the matings.

The eyespot barbs are locked together with microhooks much like those on flight feathers.

This gives each eyespot greater density than the surrounding loose barbs, keeping it essentially in place as the loose barbs shimmer in the background.

In addition, the longer the train feathers, the faster the males shook their feathers during courtship displays, requiring more muscular effort.

This suggests that the dynamics of feather vibrations could also signal male muscle power to choosy females.

"Charles Darwin observed that peacocks vibrate their feathers during courtship, but it took this multidisciplinary team of scientists to characterise the dynamics of this behaviour," said one of the researchers Suzanne Kane from the University of British Columbia in Canada.

For results, the researchers used high-speed video to analyse the "train-rattling" movements of vibrating train and tail feathers in 14 adult peacocks, and measured the vibrations of individual feathers in the lab.