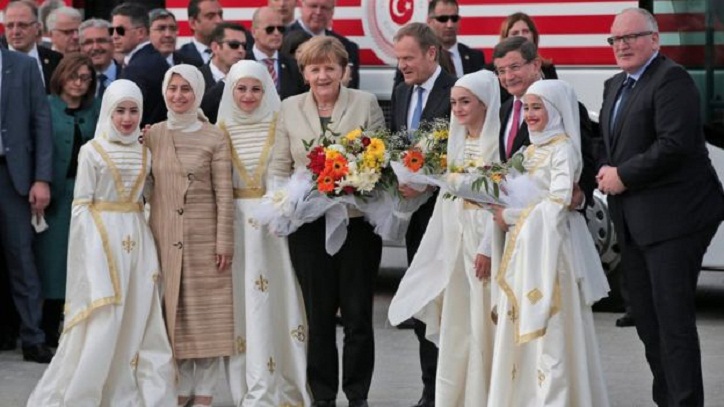 Angela Merkel is welcomed at the camp, as Tim Willcox reports

German Chancellor Angela Merkel and top EU officials have visited a migrant camp on the Turkish-Syrian border, as they seek to bolster a controversial EU-Turkey deal.

The team met children and inspected living conditions at the Nizip camp, home to some 5,000 migrants.

However, rights groups have criticised the visit as "sanitised".

They also question the legality of the deal, which deports to Turkey migrants who do not obtain asylum in Greece.

They argue that Turkey is not a safe place to return people.

Mrs Merkel arrived in the southern city of Gaziantep, near the Syrian border. She was met at the airport by Turkish Prime Minister Ahmet Davutoglu.

Mrs Merkel has faced opposition in Germany for her migration policies and has defended the deal with Turkey despite opposition from some European partners.

'Not everyone is convinced': Selin Girit, BBC News, Gaziantep

It has been over a month now since the migrant deal between the EU and Turkey was struck, but not everyone is convinced that it is working smoothly.

Although the number of migrants reaching Greece from Turkey has dropped by around 80%, few of staff promised by the EU to help enforce the deal have arrived, and many EU nations are dragging their feet to accept more migrants.

Angela Merkel said the aim of the visit was to see the living conditions of migrants in Turkey.

But more will be on the table, such as the promise of visa-free travel for Turkish citizens willing to go to Europe, which seems to be one of the most contentious issues.

Mrs Merkel and the EU officials met the camp's elected leaders and posed for photographs with children, before inspecting the containers that serve as homes.

The European delegation's visit reflects an anxiety to see improvements in living conditions.

Judith Sunderland, HRW acting deputy director for Europe and Central Asia, said the delegation should instead visit camps for the displaced on the other side of the border "to see the tens of thousands of war-weary Syrian refugees blocked" by Turkey from entering.

Security has been stepped up for the visit. Overnight, six foreigners suspected of links to so-called Islamic State were arrested in the central city of Konya.

Officials there said those arrested "wanted to attack dignitaries of the state and strategic targets".

The goal of the EU-Turkey deal is to deter migrants, mainly Syrians and Iraqis, from making the crossing between Turkey and Greece.

Under the agreement, migrants who have arrived illegally in Greece since 20 March are expected to be sent back to Turkey if they do not apply for asylum or if their claim is rejected.

For each Syrian migrant returned to Turkey, the EU is due to take in another Syrian who has made a legitimate request.

The scheme has reduced sharply the number of arrivals, from more than 56,000 in February to around 7,800 over the past 30 days, according to the European Commission.

However, the International Organization of Migration said unofficial data for arrivals in Greece in recent days suggested the numbers were picking up again.

And the promised relocation of migrants to EU countries seems to be slow as nations are reluctant to take in more migrants - 103 Syrians have been resettled from Turkey to Europe, the commission said.

Have EU promises been kept?

Rights organisations have attacked the scheme, with Amnesty International saying that Turkey has illegally returned Syrians to their country, a charge Ankara denies.

The EU has pledged up to $6.8bn (£4.5bn) in aid to Turkey over the next four years and the main focus of this latest visit is on how to begin spending that.

Ankara, however, expects more, and has warned the EU deal may collapse if travel restrictions for its citizens are not eased as agreed.

The deal says Turkey must meet 72 conditions by 4 May to earn access to the EU's visa-free Schengen area, but diplomats say only half of those points have been met so far.

Turkey already hosts some 2.7 million Syrian refugees, at a cost of over $10bn (£7bn), the government says.

Mrs Merkel's trip comes as she faces additional pressure for agreeing to the prosecution of German comedian Jan Boehmermann, who is accused of insulting Turkish President Recep Tayyip Erdogan by reading out a satirical poem.

Advocates of freedom of speech in both Turkey and Germany have called on her to send out a strong message on the issue during her visit.