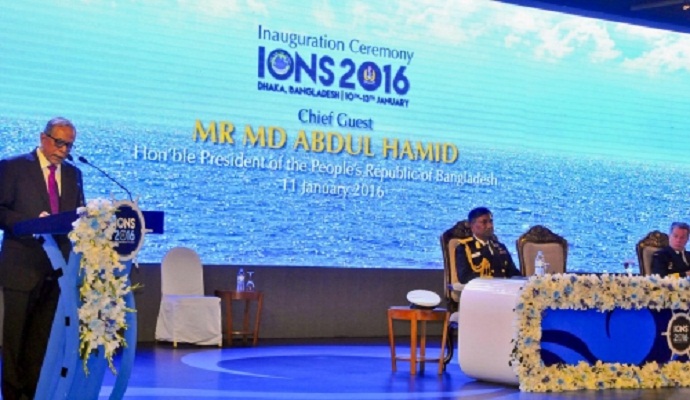 He also said a combined effort was necessary to overcome the adverse impact of climate change and dealing with the natural disasters, UNB reports.

"Formulation and effective implementation of 'Blue Economy' is a demand of the time for economic well-being of the region, which can be achieved by efficient use of sea resources," he said.

"I believe that we would be able to formulate required policies pertaining to all important issues using IONS as a dialogue platform," the President said.

He made the statement as he addressed the opening ceremony of the 5th biennial assembly of the Indian Ocean Naval Symposium (IONS) 2016 held in the city.

Officials from 33 countries including the chiefs of navies from 13 countries are attending the three-day symposium.

The ‘Indian Ocean Naval Symposium’ (IONS) is a voluntary initiative that seeks to increase maritime co-operation among navies of the littoral states of the Indian Ocean Region by providing an open and inclusive forum for discussion of regionally relevant maritime issues.

While the geographical borders divide the countries, President Hamid said friendship across the ocean can unite the nations.

"IONS is not only a ray of hope for the Indian Ocean Region but also a forum of immense importance for the Asia-Pacific and the adjoining oceans,” he said.

The Indian Ocean carries huge prospect and potentials both from geo-strategic and geo-economic point of view to facilitate maritime trade and commerce, economic prosperity and exploitation and exploration of the ocean resources, he said.

"Proper management of this vast region and its effective utilization is not possible by single nation alone. In this regard, we shall have to work together as a single entity so that every potential could be utilized for the greater benefit of the mankind, " the President added.

He said Bangladesh has set a glaring example to the world by amicably resolving its long-standing maritime boundary disputes with both its neighbors--India and Myanmar.