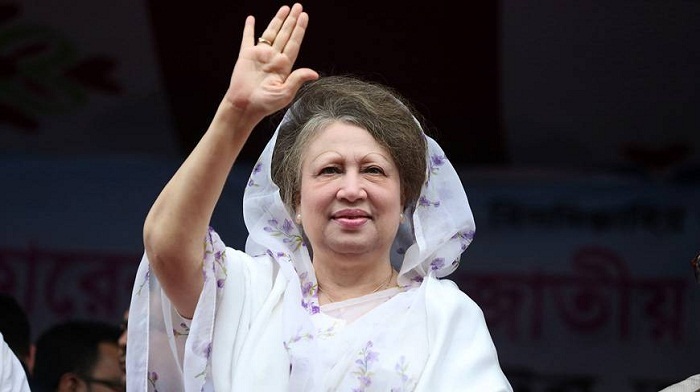 BNP Chairperson Khaleda Zia on Tuesday urged the government to engage in talks to find out a solution to the country’s political problem and ‘restore’ democracy.

“Let’s bring a solution through talks and restore democracy.  We don’t have any grievance, complaint and anguish against anybody… we had suffered and also forgotten it. So, I would like to tell all there’s no reason to be afraid of. You [govt] made mistakes and it’s enough to realise that,” she told a public rally in front of her party’s Nayapaltan central office.

Khaleda, also former Prime Minister, urged the people from all walks of life to get united for raising their voice peacefully against the current repressive regime and for restoring democracy and getting rid of repressive acts and misrule.

BNP arranged the rally to observe January 5 as the ‘Democracy Killing Day’, showing the party’s disapproval to 10th parliamentary polls held on this day in 2014.

Referring to December-30 municipal polls, she said the government and the Election Commission once again proved that no fair and acceptable election is possible under them.

The BNP chief said the ruling party has resorted to vote rigging and irregularities in the polls to show people it has vast popularity. “If you want to show your popularity then hold a fair election under a non-party administration,” she asked the government.

Appreciating the government for finally allowing her party to hold the rally, she urged the government to restore people’s all other democratic rights. “Or else, it can’t say when people will arise and put up a strong resistance.”

Khaleda demanded the release of all ‘political prisoners’, including Nagorik Oiky convener Mahmudur Rahman Manna, her party’s arrested leaders and activists, and withdraw the ‘false’ cases filed against them.

She called upon all the law enforcers not to carry out the government ‘unjustified orders’ and ‘repress’ people.

The BNP chief also assured officials and administration and law enforcers that her party will not sack any one if her party returns to power.

Chaired by BNP Standing Committee member Gayeshwar Chandra Roy the rally was addressed, among others, by other party senior leaders.