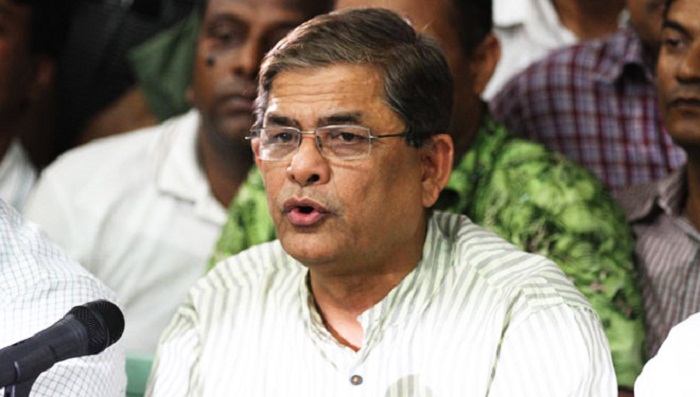 BNP acting secretary general Mirza Fakhrul Islam Alamgir on Monday assured they will arrange their rally on January 5 in a peaceful manner saying that BNP will not go for any conflicting programme.

“We would like to say unequivocally that the January-5 rally will be held peacefully as we don’t do politics of conflict and we won’t go for any conflicting programme,” he said.

Fakhrul came up with the assurance at a press briefing after a preparatory meeting about the rally with leaders of the BNP’s Dhaka city unit and its associate bodies at the Party’s Nayapaltan central office, BSS reports.

He said they want to arrange the rally either at Suhrawardy Udyan or in front of the party’s Nayapaltan central office with government permission. “However, we’re yet to get permission for the rally.”

The BNP leader alleged that some persons and political leaders of the ruling party are trying to heat up the political landscape unnecessarily following the BNP’s rally.

He also sought all-out cooperation from the government and the authorities concerned in holding the rally peacefully if they get permission.

Fakhrul hoped that the government will have an effort to restore democracy in the country and cooperate with them in ensuring the basic rights of arranging their rally.

Earlier, BNP decided to hold a rally in the city on Tuesday to observe January 5 as ‘Democracy Killing Day’ registering the party’s protest against 10th parliamentary elections held on that day in 2014.

BNP also sought police permission to hold the rally at Nayapaltan after getting its first appeal for Suhrawardy Udyan was turned down by the Dhaka Metropolitan Police (DMP).

As both Awami League and BNP declared their respective rallies at Suhrawady Udyan, police turned down the pleas of both the parties saying no programme and counter-programme will be allowed there.