Sher-e-Bangla Agricultural University (SAU) held its first convocation with great enthusiasm and striking festivity on November 16, 2015. Over 2000 graduates and post-graduates from 2 faculties achieved degrees, among them 22 were awarded with gold medals for their outstanding result.
President and chancellor of the university Abdul Hamid conferred the degrees on the graduates. Around 5000 invitees from national and international arena attended the function.
However, the festivity began almost a week ago. The entire greenish campus, house buildings, administrative buildings and dormitories were decorated with pompous colours and lightings. The participating graduates started to gather in the campus days before the date of convocation from different parts of the country and abroad. 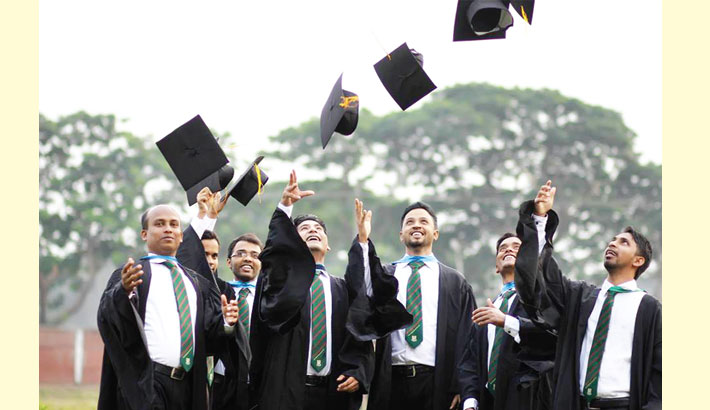 It is mentionable that the university authority invited its one of the brightest pupils Dr. Kazi M Badruddoza, famous agricultural scientist who introduced Kazi Guavas (Pearra) in Bangladesh, as the convocation speaker. Professor Abdul Mannan, chairman of UGC, attended the programme as a special guest.
President Abdul Hamid appealed to the young graduates to work towards the development of food and agricultural sector in our country in his speech. The premier Sheikh Hasina was awarded “Doctor of the University” degree at the convocation as recognition of her contribution to the agricultural and environmental development of the country.
The first part of the ceremony came to an end with the departure of the president. After that, a gala cultural programme was arranged to mesmerize the participants.

The writer is a student of Sher-e-Bangla Agricultural University.