Surprises not enough for Bangladesh 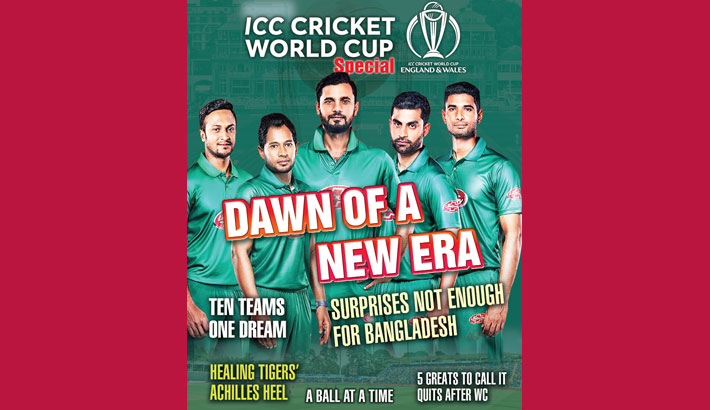 Surprise will not be good enough for Bangladesh as they are all set to take part in the ICC World Cup considering their stellar form in recent times along with the experience of the core group of cricketers.

Since the announcement of the World Cup squad by the national selectors certain quarters gave it the tag of Tigers’ strongest WC squad and if statistics are taken into consideration not very many will defy that claim.

There are four players in Bangladesh squad who will be featuring in their fourth World Cup while there are seven cricketers making their maiden World Cup appearance.

Bangladesh is the second most experienced team in this World Cup, Mashrafe Mortaza, Shakib Al Hasan, Mushfiqur Rahim, Mahmudullah Riyad and Tamim Iqbal have combined appearance which amounts to 1304 ODIs just behind India.

The mixture of experience and youth certainly give the men in red and green and edge over others in the global tournament and in a cricket mad country the hype is getting higher with every passing day.

Teams like England, India and South Africa are expected to rally on explosive batting line-up to put up high scores and would like to dismantle their opponent with high pace and leg-spin.

Bangladesh do not possess such firepower but what they will attempt is to try and play their brand of cricket which is based on holding opponents down to scores less than 300 runs with a skilled bowling attack while their batsmen will be more focused on bisecting through the gaps with odd boundaries every now and then.

Whether taking this route will pay dividend or not only time can tell considering World Cup is expected to be a high scoring affair but certainly it is the way they operated in the recent past and that too quite successfully.

Tigers’ performances since the New Zealand series have been quite encouraging as they have beaten West Indies three times in this month’s tri-series in Ireland.

Bangladesh batsmen also dominated the West Indies pace attack, which is a step up from last July when the West Indian pace unit handed them two humiliating Test defeats before they crawled back to beat them at their own den in the three-match ODI series.

Since 2015 World Cup, Tigers have won nine ODI series, which included their hot streak between April 2015 to September 2016 when they won five consecutive home series against Pakistan, India, South Africa, Zimbabwe and Afghanistan.

The man management skill of skipper Mashrafe Mortaza doesn’t need any introduction as his influence is overwhelming in the Bangladesh dressing room and it only increases through the presence of the core group of cricketers known to be the fabulous five with Shakib Al Hasan, Tamim Iqbal, Mushfiqur Rahim and Mahmudullah Riyad being the other member of the elite club due to their experience of playing together for over 10 years.

Shakib Al Hasan’s ability to turn the game singlehandedly on his day and above all the transformed batting style of Tamim Iqbal is expected to play key roles while the presence of Mushfiqur and Mahmudullah provides Tigers with stability in their batting line-up.

Bangladesh bank heavily on starting well with bat and ball and they would like to have one of their top three batsmen to stay until the thirty fifth to fortieth over before letting their experienced middle order blast through the last ten overs as they don’t have a designated big-hitter.

With the recent form of Soumya, if he stays for that long then nothing is impossible for Tigers as he had shown his might with the way he dominated West Indies bowling attack and the performance of Mossadek Hossain only indicates that Tigers can have someone who can bat at fifth gear at number seven until Sabbir Rahman comes in his place as they seemed not too interested to change Mohammad Mithun from number five position.

Bangladesh are confident that if their bowling can contain opposition to 250 runs to 270 runs and if they bat first, they are likely to set target of around 280 to 320 runs, a score that they have defended successfully 12 out of 18 times batting first since the 2015 World Cup.

Bangladesh have also built a strong bowling line-up, based mostly on Mashrafe as the experienced campaigner through his medium pace mixed with cutters and a bit of swing keeps things tight.

Shakib also brings control and looked to have a settled spin partner in Mehedi Hasan Miraz in the recent past but it is Mustafizur Rahman’s variety of cutters and slower balls which make him a match-winner.

Mohammad Saifuddin is expected to be playing as the third pace bowler and considering his performances in the ODI it seems he will be asked to bowl in the death and come up with lethal Yorkers.

Rubel, who has also reached 10 years in top-flight cricket, is currently the quickest bowler in their line-up but his chance to find a spot in the playing eleven is not too bright as he is recovering from a side strain.

Bangladesh are capable of beating higher-ranked sides in big tournaments under pressure and they have shown it in the Champions Trophy  2017 and reached the semi-final while they also made it as far as the quarter-finals in the World Cup 2015.

The only thing that might work against them is the burden of high expectations.

The good thing is that even skipper Mashrafe Mortaza believes it is possible for them to lift the trophy if they can progress beyond the group stage.

‘’When in Rome, do as Romans do. We have to adapt to survive. If we think we cannot, then we will not be able to do anything in the tournament. We could not or did not is one thing; and we have to is another.  Eyeing 300- 330 runs or 350 runs might be a far shot, but we have to adopt the mindset to score 300 runs on average. We have to put big scores on the board if we bat first while we have to be prepared to chase them down if batting second,” he concluded.

The confidence in the tone of the Mashrafe, who is playing his last World Cup, only indicates that he would like to leave a legacy and that will not be possible by just making the headlines through beating a big team like the way they did in the past four occasions when they had beaten three teams after earning two wins in their maiden World Cup appearance when they came under the spotlight by beating Pakistan in 1999.

It was a surprise 20 years back but it won’t be the same this time around as everyone is expecting them to do well and also set a new benchmark by making their maiden appearance in the World Cup final and who knows what is in store after that.