Comilla Victorians clinched their third successive victory in the ongoing Bangladesh Premier League 2023 after they beat Dhaka Dominators by 33 runs in their sixth match at the Zahur Ahmed Chowdhury Stadium in Chattogram on Thursday.

Comilla’s Pakistani duo Khushdil Shah and Mohammad Rizwan orchestrated their victory as the former struck a blistering knock of 64 off 24 balls while the latter made 55 not out as they posted a massive total of 184-4 in 20 overs after they were sent into bat first. 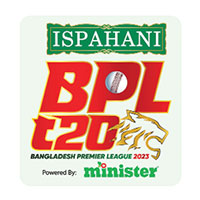 Dhaka skipper Nasir Hossain then struck an unbeaten 66 off 45 balls and shared two crucial stands of 51 and 66 runs respectively with Mohammad Mithun (36) and Ariful Haque (24 not out) but the target seemed beyond their reach as they could make only 151-4 in their stipulated overs.

It was Dhaka’s fourth consecutive loss in the tournament and they are now poised at the bottom of the points table with just two points from five games.

However, with this hat-trick win in the tournament, Comilla, who started the event with three consecutive defeats, jumped to third place in the points table with six points from six matches.

Comilla, however, didn’t start the day in a similar fashion as they lost in-form Liton Das (0) in the second ball of their innings before Rizwan and skipper Imrul Kayes put up a 47-run stand for the second wicket.

Kayes made 33 off 26 balls before he was dismissed by Dhaka skipper Nasir while Johnson Charles also scored 20 runs but Comilla were missing a quick-fire knock which was finally introduced by Khushdil after he came to the crease in the 14th over.

The 27-year-old Pakistani batter smashed Dhaka bowlers mercilessly all around the ground and in the 16th over which was bowled by Amir Hamza, Khushdil struck him for three successive sixes alongside two fours to start his blazing knock.

Khushdil then struck Muktar Ali for two sixes and a four in the next over before he hit three successive boundaries off Mohammad Imran Randhawa to complete an 18-ball fifty – the fastest in the current edition of BPL.

“First BPL fifty for me, that’s my role in this team, to finish well. I really enjoyed my batting today. I enjoy fielding, feels great to contribute in all three departments,” Khushdil said after the match.

Earlier, Rangpur Riders’ opener Rony Talukdar smashed a 19-ball fifty against Comilla Victorians in Mirpur on the opening day of the tournament which was the fastest fifty in the ongoing BPL before Khushdil’s one.

Khushdil was finally dismissed by Soumya Sarkar in the penultimate over after hitting seven fours and five sixes but by the time he was removed, the damage was already done for their opponents. Rizwan’s calm and composed unbeaten fifty only aggravated more problems for Dhaka as they were left with a monumental task to complete.

Dhaka failed to grab early momentum in their chase as they lost Soumya (0), Robin Das (0) and Ahmed Shehzad (19) within the seventh over of their innings and were reduced to 34-3. It was Soumya and Robin’s second consecutive duck in the tournament.

Although Nasir alongside Mithun and Ariful tried hard to get back into the match, their efforts only reduced the margin of the defeat in the end.

“The last five overs (with the ball) really pegged us back. Khushdil Shah batted really well. It was always going to be difficult for us after the top-order failed,” Nasir admitted after the defeat.