Expat with dementia gets back family after 25 yrs

Such a scene is usually seen in a drama or movie where a father hugs his son after a separation of long time, breaking into tears. However, this has happened to an elderly man who could not recall whereabouts of his family after returning home from Saudi Arabia through reunion with his sons and daughters after 25 years.

The incredible incident took place at Hazrat Shahjalal International Airport (HSIA) in the capital on Wednesday.

Expatriate Abul Kashem landed at HSIA on January 13 night from Jeddah. He could not tell his exact address as he forgot many things due to dementia. He even did not have a passport with him. 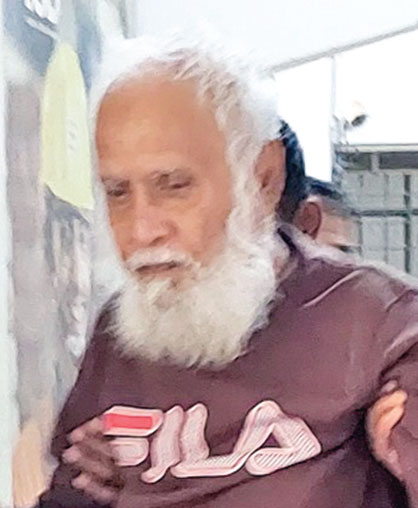 The airport police then sent him to the Migration Welfare Centre operated by BRAC. To find his family, BRAC staff started a search in different areas of Chattogram based on his accent. Journalists also published and telecast reports on him. Finally, with the help of councillor from ward 25 of Chattogram City Corporation (CCC), his family was traced and he was reunited with them.

Kashem’s family members came to Dhaka on Wednesday and took their loved one with them.

BRAC and airport officials and his family members shared their feelings at a press conference during the handover ceremony.

BRAC’s head of Migration Programme Shariful Islam Hasan said, “Abul Kashem has been suffering from dementia. He came to Bangladesh with a travel pass as he didn’t have a passport.”

According to him, Kashem sometimes said his family lives in Chattogram’s Nayabazar, sometimes in Teknaf, Pahartali and even in Halishahar. He said he has six daughters, three sons and 8-10 grandchildren.       The BRAC official said Kashem told them that his parents’ names were Fozel Ahmed and Shabana and wife’s name is Amena. He also said the names of his three sons are Mannan, Nur Hasan and Enamul Hasan and of them, Nur sells vegetables.

But it was difficult for them to find Kashem’s family as his address was unknown. Yet following his colloquial language, they understood that his home is located somewhere in Chattogram.  Therefore, they asked BRAC staff to distribute leaflets with his name and photo.

Hasan said journalists also extended their support by reporting on the plight of the hapless elderly man.  CCC councillor and panel mayor Abdus Sabur Liton had been able to recognise Kashem after seeing his photo in the leaflet. He then called Kashem’s son Nur Hasan.

They checked the national identity card of Nur Hasan and talked to Kashem’s Dubai expat youngest son and his wife Amena and daughter Ruma who are staying in Dhaka and understood that they are his family members.

Addressing the conference, HSIA security manager Squadron Leader Md Russell Talukder said, “We always see such incidents in movies. This is for the first time that I’ve witnessed such an incident in reality. The sight of a father meeting his son after so many years can’t be expressed in words.”

Kashem’s eldest son Nur Hasan expressed their sincere gratitude to BRAC and journalists. “We had no contact with my father for a long time. We didn’t know his whereabouts in Saudi Arabia. When my father went to Saudi Arabia 25 years ago, my younger sister Ruma was in my mother’s womb. We have very few memories with our father. We’ve now got him back.”