Prime Minister Sheikh Hasina on Saturday unveiled a book titled “Bhengechhe Duyar Asechho Joyatirmoy”, a compilation of reports and pictures published on Bangabandhu in different national and international dailies from 1966 to 1975, reports BSS.

The premier unwrapped the book at a joint meeting of Awami League (AL) National Committee, Central Working Committee and Advisory Council at her official residence Ganabhaban, said a press release.

On January 10 in 1972, Bangabandhu Sheikh Mujibur Rahman, the undisputed leader of the nation and supreme commander of the country’s Liberation War, returned to the sacred soil of independent Bangladesh via London and New Delhi after 290 days of captivity in Pakistan jail.

The 100-page book is featured with the first pages of 95 newspapers, including Dainik Azad, Dainik Ittefaq, Dainik Sangbad, Dainik Purbadesh, Daily Pakistan and later Dainik Bangla, Dainik Samaj, The Morning News, The Peoples, Pakistan Observer and Bangladesh Observer where events and special reports, and pictures were published on Bangabandhu from 1966 to 1975, including his historic homecoming on January 10, 1972.

It is hoped that this book will help the new generation know about Bangabandhu Sheikh Mujibur Rahman’s political life and his contributions to the nation as well as the genuine history of the Liberation War, said the press release. 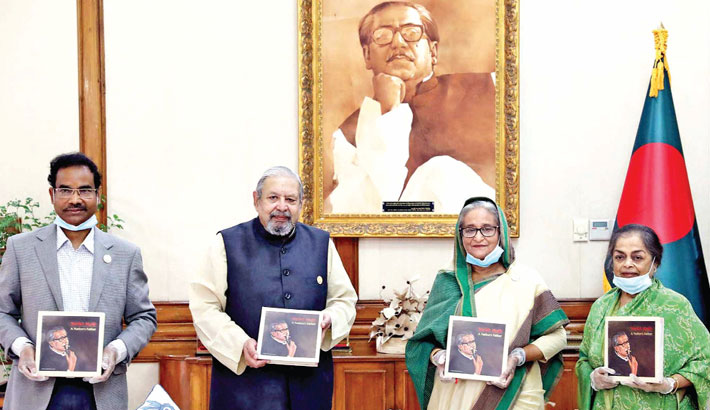 Education Minister Dr Dipu Moni hands over the summary of the results of Higher Secondary Certificate (HSC) and equivalent examinations-2022 to Prime Minister Sheikh Hasina at the latter’s office in the capital on Wednesday. Deputy Minister for Education Mohibul Hassan Chowdhoury was present. — PID PHOTO

Participants of NDC Course-2023 of National Defence College pose for a photograph during a visit to the Defence Ministry in the capital’s Sher-e-Bangal Nagar area on Wednesday. Senior Secretary of the Ministry Golam Md Hasibul Alam was present. — ISPR PHOTO