At least 8 people were killed and 5 were injured in road accidents in Kurigram, Savar, Feni and Joypurhat on Saturday.

In Kurigram, three people died and five were injured in two accidents that took place in Trimohini area of the Kurigram-Rangpur road and on Phulbari-Dharla road in Phulbari upazila, reports UNB.

One of the deceased is Md Abdul Hannan, 45, but the identity of the other could not be ascertained.

Five injured passengers were admitted to Kurigram General Hospital. Abdus samad, one of the injured, was later transferred to Rangpur Medical College and Hospital due to critical condition.

Confirming the matter, Sub-Inspector (SI) of Kurigram Sadar Police Station Zahid Hasan, said they seized the bus after recovering the bodies. The bus driver was sent to Rangpur for treatment.            In another incident, a tractor helper, Shariful Islam, 16, fell off the tractor as the driver suddenly hit the brake.

According to locals, the teenager was in a critical condition as he was run over by a truck. Shariful later died after being taken to the hospital.

Confirming the matter, Sarwar Parvez, in-charge (Investigation) of Phulbari Police Station, said legal action will be taken in this regard.

In Savar, two people were killed when a bus hit a motorbike at the Noyarhar area on the Dhaka-Aricha Highway.

According to Savar highway police, the accident left one person dead on spot. Another passenger later died after being taken to the hospital. The identity of the deceased is yet to be known.

In Joypurhat, a college student was killed as a human haulier locally known as Votvoti hit his motorcycle in Sadar upazila here on Saturday, reports BSS.

The deceased was identified as Alif, 22, hailed from the Shantinagar area in the town. He was an intermediate-level student at Akkelpur Mujibur Rahman Govt College.

Police seized the vehicle. A case was filed in this connection.

In Feni, two people were killed and six others were critically injured as their microbus crashed into a roadside tree after losing control on the Dhaka-Chattogram Highway in Feni Sadar upazila on Saturday morning.

Belal, 45, is among the injured. Five others have been identified as injured and receiving treatment at Feni Sadar Hospital: Saber Hossain, 14, Sabbir Hossain, 10, Fahmida Aktar, 22, Sharif Uddin, 30, Limon Hossain, 8.

Highway police and fire service department said the group was returning home to their village in Gobindarapur after receiving Belal at Hazrat Shahjalal International Airport.

The accident occurred Saturday morning when the speeding microbus hit the roadside tree, presumably after losing control on the highway. The driver died on the spot. Although seven others were rushed to the hospital, Jannatul's injuries did prove fatal by the time they arrived.

Mostafa Kamal, officer-in-charge of Feni Highway police station, confirmed the tragedy saying that the bodies of Jannatul and Ripon were sent to the morgue for autopsies.

The bodies will be handed over to their respective families upon completion of legal formalities, the OC added.

8 killed in road crashes in dists

8 killed in road crashes in 5 districts 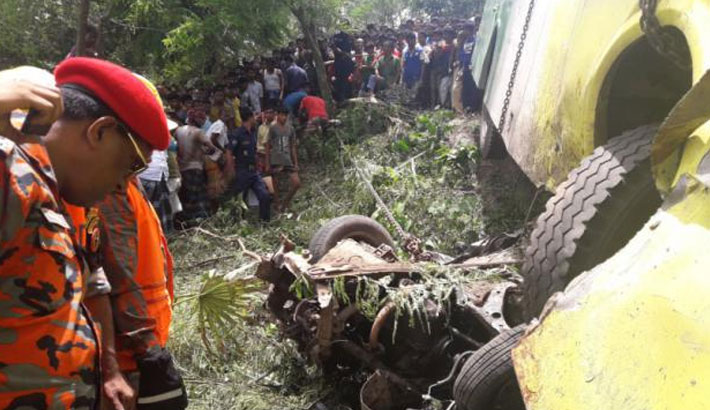 28 killed in road crashes across country in 4 days