Different types of architecture are spread in every corner of the world. Recently, such an architectural relic has been discovered in Saudi Arabia. The most important of these are the stone shrines and parts of the altars. It is known that the people of Alfao used to perform various rituals there. The rock temple found east of Alfao is located on one side of Tuwa Ik Mountain which is also known as Khashem Kariyah. Social media is abuzz with pictures of old temples in Saudi Arabia.

During an archaeological survey in Saudi Arabia a city around 8,000 years old and traces of an ancient temple have been discovered through excavation. Besides the temple, many other things were found which surprised the archaeologists. According to Saudi media reports this ancient temple was found in the city of Al-Faw, located in the south-western part of the capital Riyadh. Al-Faw connects the contemporary cities of Wadi Al-Dawasir and Najran. The stone temple found there was a centre of practising rituals and ceremonies of local people in ancient times.

Regarding this the Arab News informs that a team of the Saudi Arabian Heritage Commission, a joint initiative of Saudi Arabian and French archaeologists, discovered the temple. An ancient human habitation was also found from which it is assumed that a lot of people lived there. As reported, these habitations are believed to be of Neolithic age (New Stone Age, from 10,000 BC to 2,200 BC). The remains of the original habitation have been discovered using surveys, archaeological excavations, laser scanning and ground-penetrating radar. 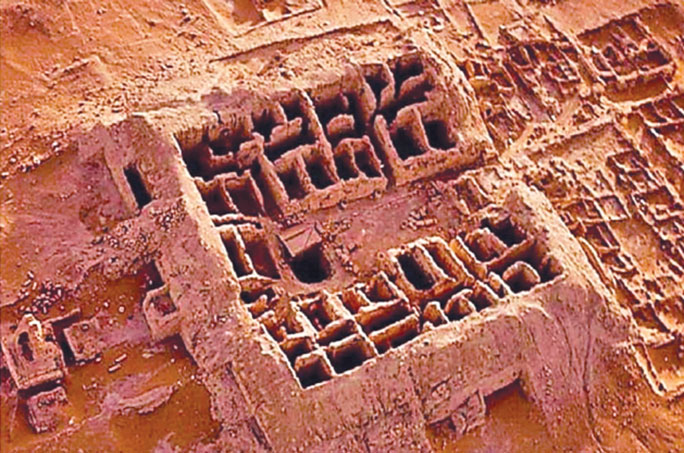 According to Arab News most of the temple is now lost but stone remains of the temple still exist. Originally, parts of an altar were found on the edge of the Tuwaik Mountains. In fact, the presence of the temple there mainly surprised everyone. Not only that, it is known that the ruins of the altar were also found near the temple. It is assumed that this temple was used as a place of worship for the inhabitants of the city of Al-Faw. Archaeologists think that the inhabitants living there might have performed different religious rituals in addition to worship.

Al-Faw, the once magnificent capital of the Kingdom of Kindah, has been the subject of a project spearheaded by the Saudi Heritage Commission headed by a Saudi led international scientific team. The Kindah Kingdom was a confederation of north and Central Arabian nomadic tribes in the 5th and 6th centuries. Historically, it is recognised as the first nomadic Arabian dynasty.

Utilising latest technology a team of researchers have also discovered some remarkable items including 2,807 graves of different periods. According to a press release issued by the Saudi Press Agency these graves have been documented and classified into six distinct groups. Besides, religious inscriptions have also been found there which are mainly addressed to ancient gods. The name of this deity, as written on the stone, is Kahal.

Apart from the temple, several devotional inscriptions were also found which question our understanding about the religion and belief of whichever community inhabited there. Of these inscriptions, one is the Jabal Lahaq sanctuary which is addressed to Kahal, the local deity. Researchers speculate that this inscription could indicate a possible trading and economic relationship between the cities of Al-Faw and Al-Jarha. Perhaps it could be an indicator of religious tolerance or the worship of the deity Kahal by the residents of Al-Jarha.

This could open up the possibility of monotheistic (belief that there is only one god) practice in the Middle East or Western Asia which has been traditionally considered as the birthplace of the monotheistic religions – Christianity, Islam, and Judaism. It also challenges the idea of idol worship. However, researchers think that these are just preliminary observations which require further analysis,

The site also revealed foundations of four massive buildings with corner towers that could potentially have been used as resting places for weary travellers and their caravans. As reported by Zawya, this reinforces the idea of a trade-based relationship, particularly after assessing the architecture, internal plans and open-air courtyards,

Other finds opened up the possibility of the existence of a number of establishments for irrigation, agriculture and other purposes. A complex irrigation system was found having canals and water cisterns. There were hundreds of pits dug to divert rainwater to agricultural lands providing an explanation for how local residents countered the harsh and arid climate. The surveys and remote sensors helped reveal the presence of widespread agricultural fields that grew a variety of crops, reports Asharq Al-Awsat.

Apart from this, archaeologists have found the presence of four monumental buildings and hundreds of underground aquifers there. That is, apart from storing water for agriculture those were used for other daily activities. The survey and excavation works at the vast site of Al-Faw were initiated by King Saud University led by a Saudi archaeologist Dr. Abdul Rahman Al-Ansari which continued for the last 40 years.

A series of rock art and other inscriptions on Mount Tuwaiq were also found which told the tale of a man called Madhekar Bin Muneim. Those also illustrated daily scenes of activities like hunting, travelling and fighting. Results of these meticulous surveys, compiled over 50 years, have been published in a 7-volume book.

These discoveries clarify why the Arabian peninsula is often called the birthplace of the first settled societies. Here, human societies achieved advancement in agriculture, architecture, gathering, and other survival techniques that have come down through the ages.