A proud nation is celebrating Victory Day today with a renewed pledge to take the country forward by strengthening democracy and overcoming the impact of the war-triggered global economic recession.

People from all walks of life will pay deep respects to the brave sons of the soil who made supreme sacrifices to liberate the country from the clutches of the Pakistan occupation forces.

President Abdul Hamid and Prime Minister Sheikh Hasina will lead the nation in paying homage to the war heroes by placing wreaths at the National Memorial in Savar in the morning.

Recalling the bravery of the freedom fighters and their supreme sacrifices, the country wants to establish its strong footing on the world stage by 2041 by making continuous stride in different socio-economic indicators.

This day in 1971, the Pakistan occupation forces surrendered to the Bangladesh-India allied forces at historic Suhrawardy Udyan in Dhaka after a nine-month bloody war of independence.

During its journey, Bangladesh has made tremendous success in various fronts, including graduation from the least developing country to developed one and continuing efforts to earn global recognition in other important sectors.

Father of the Nation Bangabandhu Sheikh Mujibur Rahman and his daughter Prime Minister Sheikh Hasina are the key figures behind the great achievements the country has made.

Bangabandhu has given us the red-green flag while his daughter Prime Minister Sheikh Hasina is working relentlessly to take the country to new heights by attaining economic emancipation.

The day’s celebration programmes will begin with a 31-gunshot salute at dawn.

Leaders and activists of the ruling Awami League and different socio-cultural organisations and people from all walks of life will also place wreaths at the National Memorial to pay respects to the war heroes.

Bangladesh Army, Navy and Air Force as well as freedom fighters, paramilitary forces, law enforcement agencies and different ministries will participate in Victory Day parade to be held at the National Parade Square in the capital.

On the occasion of the Victory Day, President Abdul Hamid and Prime Minister Sheikh Hasina greeted the people of the country and vowed to make Bangladesh a prosperous and developed one.

In his message, the President recalled with profound respect the greatest Bangalee of all time Father of the Nation Bangabandhu Sheikh Mujibur Rahman alongside paying deep homage to the freedom fighters who made supreme sacrifice in the War of Liberation for the cause of country's independence.

He said the aims of our independence were to attain political sovereignty as well as people's economic emancipation.“We shall have to give institutional shape to democracy in order to deliver the benefits of independence at the people's doorstep, which we attained through the sacrifice of millions of martyrs,” he said.

“The political parties will have to nurture the culture of mutual respect and of tolerance of others opinion. Let’s contribute more from our respective positions in implementing the spirit and values of War of Liberation and take the nation towards the path of development and prosperity,” he added.

In her message, Sheikh Hasina said the establishment of the nation-state 'Bangladesh' through the victory of the War of Liberation on 16 December 1971 was the greatest achievement of the Bangalee nation.

“To make this achievement meaningful, we have to know and let people know about the Greatest Hero of Independence Bangabandhu Sheikh Mujib and the War of Liberation,” she said.

She expressed her firm belief that Bangladesh will become a hunger and poverty-free and developed and prosperous country by 2041 as dreamt by Father of the Nation Bangabandhu Sheikh Mujibur Rahman.

The national flag will be hoisted at all public and private buildings across the country on the occasion.

Newspapers will publish special supplements while radios and televisions will air special programmes, highlighting the significance of the day.

Special prayers will be offered at mosques, temples, churches, pagodas and other places of worship, seeking divine blessings for peace and progress of the country.

Improved diet will be served in jails, hospitals, orphanages and vagrant homes across the country.

The main thoroughfares and road islands in the capital have been decorated with miniature national flags. Besides, important government buildings have also been illuminated.

The ruling Awami League has taken a three-day programme to celebrate Victory Day.

The national and the party flags will be hoisted at all the Awami League offices across the country, including the central office on Bangabandhu Avenue.

Other programmes include placing wreaths at the National Mausoleum in the early morning, paying tribute to the Bagabandhu’s portrait at Bangabandhu Bhaban, offering munajat and milad mahfil at the majar of Bangabandhu at Tungipara in Gopalganj.

The party will bring out a victory procession on December 17 from the historic Suhrawardy Udyan and parade different roads before ending at Dhanmondi 32.

A discussion meeting will also be held at Agricultural Institution in the capital on Sunday. Awami League President and Prime Minister Sheikh Hasina will chair the programme. 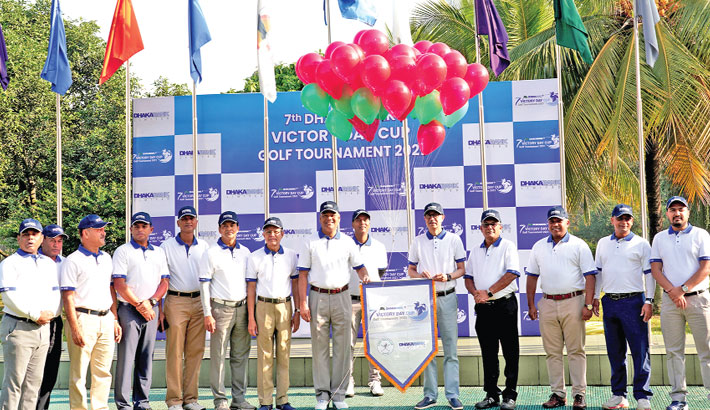