‘No special plan to counter Mbappe’

Morocco have no specific plans to deal with the danger of Kylian Mbappe in tonight’s World Cup semi-final, with coach Walid Regragui saying holders France posed too many individual threats to just concentrate on one, reports Reuters.

Mbappe is the tournament’s top scorer with five goals and came in for special attention from England in Saturday’s quarter-final, where he was rendered largely ineffective even though the French still won the game.

Morocco have no such similar plans, Regragui told a news conference on Tuesday ahead of the clash at Al Bayt Stadium.

"I am not going to try and set up any particular tactical plan to counter Kylian," he said.

"France also has other good players. (Antoine) Griezmann is on top of his game and playing well between the lines and Ousmane Dembele is also a perfect complement to Mbappe on the other wing.

"If we just focus on Mbappe that will be a mistake. They are world champions, with world class players and they will be going for it with all they got. We need to focus on what we can do to cause problems for France."

Mbappe, on the left of the attack, goes up against Paris St Germain club mate and close friend Achraf Hakimi, who is Morocco's highly rated right back.

"Achraf knows Mbappe better than me and trains with him on a daily basis, so he's better placed than I am to know how to deal with Kylian. Hakimi is one of the best players in the world, so it's going to be a great duel between the two," Regragui said.

Morocco go into the semi-final looking to add France to an impressive list of scalps at the tournament but needing to get players fit in time after the exertions of their five games in Qatar.

Morocco were still struggling with "a lot of injuries" said the coach, but players were recovering. There are concerns over the first-choice centre back pairing of skipper Romain Saiss and Nayef Aguerd in particular.

"We have an excellent medical team and they have been coming with good news. But we will have to wait until the last minute to select the team. None is out yet, but no one is in either," he said.

There would be no change to their tactical approach either, added Regragui, dismissing criticism of their defensive block and counter-attacking approach. "What good is 70% possession if you only get a few shots on goal?" he asked.

"Everybody's working, everybody is giving their best in every way and we play a collective game every time with a good spirit, which for me is everything in football.

"When you get to the semi-final of the World Cup and you are not hungry, there's a problem. Not everyone is lucky to play at this stage of the tournament. The best team here, Brazil, has already been knocked out," Regragui added.

"We are a very ambitious team, we are hungry. But I don't know if it will be enough... it can be. We are confident and are determined to rewrite the history books."

Morocco are the first African and Arab country to reach the World Cup semi-finals and looking to take that one step further.

"I know we are not the favourites, but we are confident. You might say I’m mad but I think a bit of craziness is good," he said. 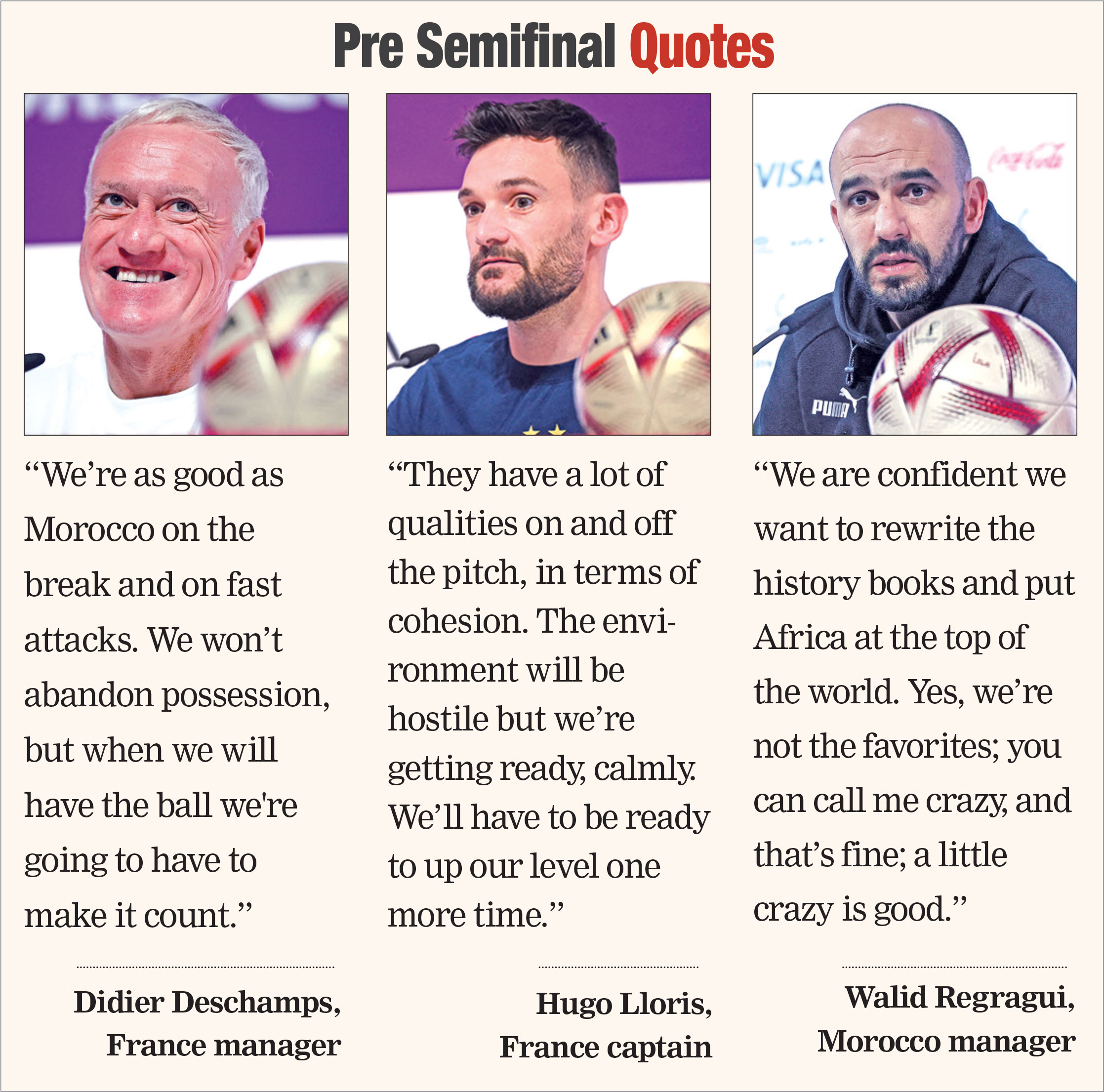