Southgate's men are the joint top scorers in the tournament with 12 goals in their four games in Qatar so far but will come up against the firepower of the tournament's top scorer in Kylian Mbappe.

The threat of the Paris Saint-Germain forward has led to suggestions Southgate could change his formation with an extra defender added to deal with France's front four of Mbappe, Olivier Giroud, Antoine Griezmann and Ousmane Dembele. 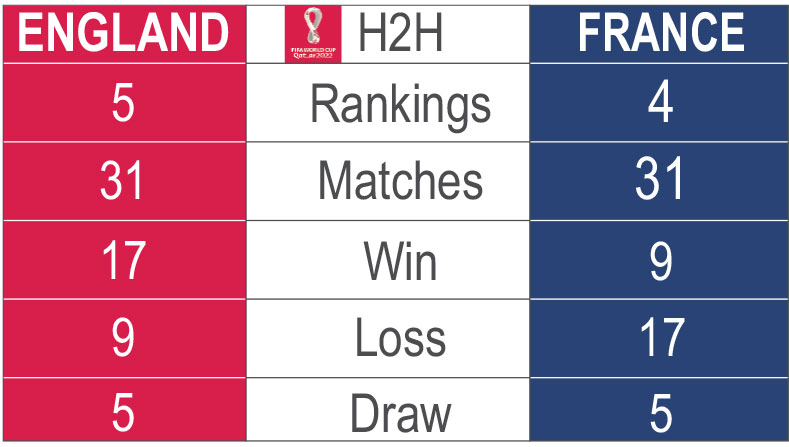 But Southgate has hinted he intends to force France into worrying more about how to stop England's array of attacking talent.

"There is no point going into a game like this and just covering up and sitting on the ropes. We believe we can cause problems with the ball and we intend to do that," Southgate told ITV.

England reached the semi-finals four years ago as France went onto claim their second World Cup in Russia.

The Three Lions then got to a first major tournament final in 55 years at Euro 2020 before losing on penalties to Italy on home soil at Wembley.

But Southgate is hopeful that those experiences will help his side end the wait for a major trophy that stretches back to the 1966 World Cup.

"We've beaten some big teams. We know we have the experience of high pressure nights behind us and as a team we've been resilient through a lot of situations, but they all prepare you for nights like this," added Southgate.