COX'S BAZAR: Prime Minister Sheikh Hasina on Wednesday said her government is working to ensure a safe and secure environment at the sea to safeguard maritime resources and marine trade for economic prosperity, reports BSS.

Our government has taken robust measure for the marine sector's development considering the immense potential of the marine resources. But, a prosperous economy only comes when we can ensure a safe and secure environment in the ocean, she said.

She added her government is working to enhance the capability of Bangladesh navy turning it into modern with quality development programmes over times to protect marine resources of the country.

The prime minister said this while formally inaugurating the International Fleet Review-2022 being held at Inani in Cox's Bazar organised by Bangladesh Navy with the title Friendship Beyond the Horizon.

The four-day IFR had begun with participation of navies and maritime organisations from 28 countries including the USA, UK, Germany, Italy, Saudi Arabia, India, China, Korea, Indonesia, Malaysia, Myanmar, Thailand, Turkey, the Netherlands and the host Bangladesh.

The IFR is being held here marking the birth centenary of Father of the Nation Bangabandhu Sheikh Mujibur Rahman and the Golden Jubilee of the country's Independence.

The prime minister said safety of the seas is essential for ensuring free international trade as currently 90 percent of the global trade is done through waterways.

She said that nowadays the strategic and economic importance of the Indian Ocean has greatly increased.

The premier said Bangladesh has proved its capability through successfully organising the IFR, adding, We also can do.

Sheikh Hasina reiterated her call to the global community to stop Russia-Ukraine war sensing its brutality.

We don't want war rather want peace. So, I called upon the international community to stop the war.   In case of any problem, it should be solved peacefully, she said.

She continued what a dire consequence a war can bring for the mankind they had seen during Bangladesh's War of Liberation in 1971 and you (global community) can realise devastation and brutality of the ongoing Russia-Ukraine war.

The prime minister said Bangladesh has always attached topmost priority to global and regional peaceful co-existence and resolve of problems with neighbouring countries through dialogue.

She went on saying that Bangladesh is always trying to maintain good relations with everyone and it has friendly relations with all neighbours and countries in the region.

We believe that any problem can be solved through negotiation and talks, not through conflict, she said.

The Armed Forces of Bangladesh are being strengthened not to fight, but to protect the country's independence and sovereignty, she said, adding, Our mission is to establish and maintain peace.

The premier said Father of the Nation Bangabandhu Sheikh Mujibur Rahman had taken initiative to build the armed forces, the symbol of Bangladesh's independence and sovereignty, as strong and time-befitting alongside building a war-ravaged country with limited resources after the independence.

Bangladesh has been able to demonstrate its commitment to peaceful coexistence in the recent past, she said.

The prime minister said Bangladesh has established its rights on the vast sea areas from neighbouring India and Myanmar by maintaining friendly relations following the foreign policy Friendship to all, malice to none formulated by the Father of the Nation.

She said Bangladesh also exchanged enclaves with India in line with the Land Boundary Agreement signed by Bangabandhu while all the lawmakers of the Indian political parties representing the parliament passed a required law unanimously to this end.

We've been able to set a rare example in the world by exchanging the enclaves with India maintaining friendly relations. I believe any problem can be solved through discussion, she said.

Bangladesh has been playing a vital role in various regional and international forums as it has attained capabilities in various fields alongside ensuring its economic progress, she said.

The premier mentioned that Bangladesh remains as the highest troop contributing country in the UN peacekeeping missions for the last two decades.

She said warships of the Bangladesh Navy have been deployed in the Mediterranean Sea as part of participation in the United Nations Mission in Lebanon since 2010.

She added These activities are the reflections of our commitment to world peace.

The prime minister hoped that the 'IFR-2022' would strengthen the bond of friendship between the coastal countries further.

I strongly believe that it will play an important role in enhancing mutual trust and achieving economic prosperity among all the coastal countries, she said.

The prime minister said Bangladesh is a country of great natural beauty and diversity with great potential and the Cox's Bazar beach is the largest sandy beach in the world.

She hoped that representatives from different countries participating in the IFR 2022 will get a detailed idea about the immense potential of Bangladesh's sea, infrastructure development in the coastal areas and tourism.

This congregation of warships and delegations from different friendly navies in Bangladesh is a manifestation of the solidarity, confidence, mutual trust, and cooperation to safeguard world peace, she said.

She thanked Bangladesh Navy for organizing this very important event, hoping that such professional activities would continue in future.

The premier also witnessed a spectacular parade by Bangladesh Navy and foreign ships' crew, free-fall jump from space by SEALs commando and operational demonstration before reviewing the fleet.

She inaugurated a jetty of Bangladesh Navy as well.

She also unveiled the cover of a publication titled Bangabandhu and Navy's Journey in 50 Years. 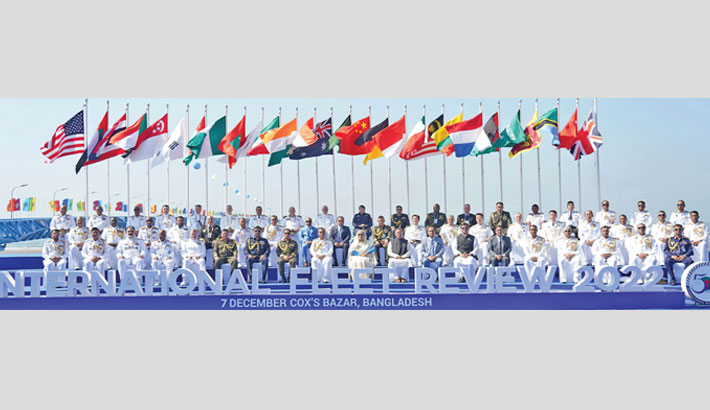 Asia set to use half of world’s electricity by 2025: IEA

Most of the traffic lights in the capital have gone out of order with many lying damaged. The photo was taken from Panthapath on Wednesday. Reaz Ahmed Sumon