I ask BCL leaders and activists to give appropriate reply to propaganda against us on the social media using the advantage of digital Bangladesh, she said.

The prime minister also urged the countrymen not to pay heed to any rumour over liquidity as every bank has enough money.

She was addressing as the chief guest the 30th national council of the BCL, the student wing of the ruling AL, at the historic Suhrawardy Udyan, here.

The premier suggested providing information online regarding their (BNP-Jamaat alliance) misdeeds such as arson terrorism, killing of innocent people, corruption and vote rigging during their tenure as a reply of the propaganda.

It will be enough to stop their propaganda against us and Bangladesh Chhatra League will be able to do it, she opined.

Sheikh Hasina reiterated her call to the countrymen not to pay heed to the rumour that the banks have no money.        We have no problem by the blessing of Allah. Each of the banks has money. So, I request all not to pay heed to any rumour, she said, referring to her talks with the finance minister, finance secretary and Bangladesh Bank governor in the last two days. 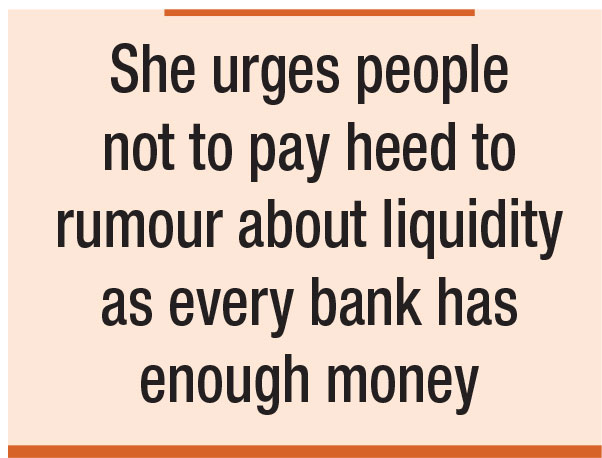 She said there is a syndicate who are out to mislead the people by spreading falsehood, adding, I know they will definitely do it (spread rumour) as they are competent to tell lies.

She described the BCL men as the sonar manush (golden sons) and soldiers of building Bangladesh as a developed and prosperous country by 2041.

The AL president asked them to prepare themselves as competent by studying attentively particularly on science and technology as they can run the state successfully and compete with the fourth industrial revolution.

She said the BCL played significant role in each progressive movement such as language movement in 1952, six-point demand in 1966, mass-upsurge in 1969 and Liberation War to dislodge Ershad and Khaleda Zia's government.

She also said the BCL is at the top of the list of martyrs who sacrificed their lives for the noble cause of saving the country. So, I hope the Chhatra League will contribute immensely to the development of the country, she added.

In this connection, she said Khaleda Zia gave arms to the students to give the Awami League a good lesson, on the contrary, she gave them books and pens to pay attention to study which is required for building the country.

Sheikh Hasina said after taking the state power violating the country's constitution and army rules, military dictator Ziaur Rahman had disappeared many BCL leaders and activists including Mofiz and Babu.

Zia also killed many military officials, whose bodies have yet been got by their relatives and carried out inhuman tortures on hundreds of the AL leaders and activists, she said. Likewise, Ziaur Rahman, her wife Khaleda Zia and Ershad did the same, she also said.

Referring to the various incidents in the dormitories of Dhaka University, Rajshahi University and other public universities, she said BNP was out to torture and kill BCL men to destroy the environment of education.

They (BNP) even killed two teachers of the Rajshahi University, she added.

The prime minister earlier inaugurated the BCL council by hoisting the national flag and releasing pigeons and balloons.

She opened the BCL website and BCL Community App at the function.

Road Transport and Bridges Minister and General Secretary of the AL Obaidul Quader addressed the function as the special guest with BCL President Al Nahian Khan Joy in the chair.

BCL General Secretary Lekhak Bhattacharjee and Office Secretary Indraneel Deb Sharma Roni respectively placed the organisational report and condolence motion over the deaths of its former leaders at the council.

A one minute silence was observed to show respect to the former BCL leaders who have died. The last BCL council was held in May, 2018.

Sheikh Hasina blasted some intellectuals describing them as intellectually disabled persons and said they wanted to dislodge the Awami League government in the name of so-called caretaker government being united with the killers, money launders, grenade attackers, arms traffickers and corrupts, pointing at Khaleda Zia and her son Tarique Zia.

The Prime Minister questioned what their problem was with the Awami League when the party is taking every step for the welfare of the country and its people.

She said many intellectuals of the country had echoed the voice of Ziaur Rahman at that time.

The Prime Minister said then BNP government during their 2001 to 2006 period had forced to declare emergency in the country through patronising militancy, terrorism and corruption and made Bangladesh champion in corruption for five consecutive terms.

Sheikh Hasina said the Awami League is the only party in Bangladesh's history which handed over power peacefully upon completion of its five-year tenure in 2001.

Awami League had handed over power peacefully (in 2001) as it believes in democracy and the power of the people, she said.

But, what Khaleda Zia did after completion of their first term in government in 1996, she questioned and said Khaleda Zia captured power after snatching the voting rights of the people by appointing army through February 15, 1996 farcical election.

She took Bangabandhu's killer Abdur Rashid to the parliament through the election in which no political party had participated for which Khaleda Zia was forced to quit power, she said.

BNP leaders should keep in mind that the people will not spare if their voting rights are snatched and they know how to dislodge that government, she said.

The Prime Minister said a false allegation was brought against the Awami League that it steals votes, adding, Why should we steal votes when people are voting for us spontaneously.

About the national election of 2018, she said BNP had given nominations to at least three persons against as money was taken by their leaders Mirza Fakhrul, Rizvi and Tarique Zia who is staying in London.

Failing to pick correct candidates, they later boycotted the election and said they were not allowed to continue in polls, she said.

The Prime Minister said two BNP leaders Enam Chowdhury and Morshed Khan came to her and told her that Tarique Zia had demanded a huge amount of money for giving the nominations.

As they failed to give the money, she said Tarique Rahman cancelled their nominations and gave those to others in exchange for money.

This was BNP's 2018 election history. Intellectuals of our country have forgotten to write that it is impossible to win elections in such a way, she said.

She said Ziaur Rahman introduced the culture of vote rigging in the country by holding the farcical yes-no vote and presidential election in 1977 and parliamentary election in 1978.

The BNP gave nothing to the people after assuming power through farcical elections while the Awami League does development of the country and its people as they were voted to power by the masses again and again.

She said Bangladesh has got recognition as a developing country as the Awami League government is in power from 2009 till the date.

The Prime Minister said her government has been working to make the country developed and prosperous by 2041.