Uruguay great Luis Suarez refused to apologise on Thursday to Ghanaians over his infamous handball at the World Cup 12 years ago.

The South Americans take on the Africans in a must-win Group H clash in Qatar today that is a repeat of the notorious quarter-final in South Africa in 2010.

Suarez deliberately handled the ball on the line at that tournament to prevent a certain goal from Dominic Adiyiah's header right at the end of extra-time. 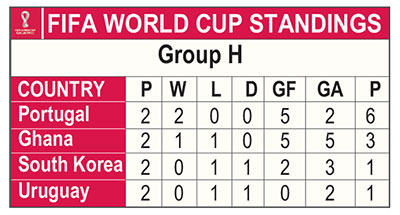 Suarez was shown a red card but Asamoah Gyan missed the subsequent penalty and Uruguay went on to win the shoot-out and qualify for the semi-finals.

Striker Suarez became an overnight hero in his homeland while Ghana missed out on becoming the first-ever African team to reach the World Cup semi-finals.

Twelve years later, asked whether he knew that Ghanaians viewed him as the "devil", Suarez said he had no regrets.

"I don't say I apologise about that because I take the handball but the Ghana player missed the penalty, not me," said Suarez, speaking in broken English.

"Maybe I can say I apologise if I tackle and injure a player and take a red card, maybe I can apologise.

"But in this situation I take a red card, the referee said 'penalty'. It's not my fault because I did not miss the penalty, the player missed the penalty." But Suarez insisted the game was in the past and that it makes no sense to talk about revenge.

"Those that are talking about revenge... were eight at the time, they have only seen it in images," said the former Barcelona and Liverpool forward, now 35.

"You can't misinterpret everything. When we played Portugal the players were talking about revenge for being knocked out (by Uruguay in 2018) but you can't live in the past."

Meanwhile, current Ghana skipper Andre Ayew, the only player left from the 2010 squad, attempted to play down talk of revenge.