When Belgium were beaten by France in their 2018 World Cup semi-final there was some grumbling that the better team had lost and the so-called 'golden generation' had been robbed of their place in the final against Croatia, reports Reuters.

Fast-forward four years and Belgium will get the chance to show what might have been against the Croats in a Group F encounter today that may lack the prestige of the tournament's showpiece finale but remains an acutely important game for both sides.

Croatia are top, level on four points with Morocco and a point clear of Belgium with three, while bottom side Canada's hopes have already been extinguished.

Belgium, ranked second in the world, must win to guarantee their place in the last 16, while 2018 runners-up Croatia need only a point to ensure they will 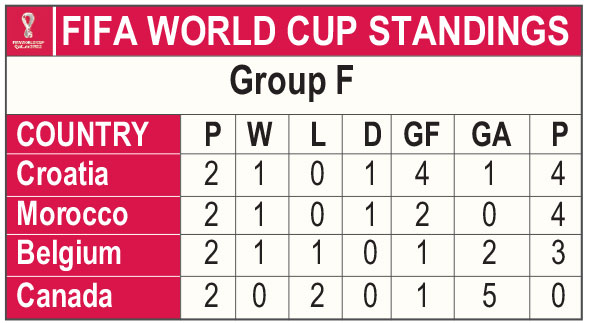 remain in Qatar beyond the group stage.

Roberto Martinez's side have been among the most disappointing of the favourites so far, with a narrow win over Canada and a humbling 2-0 defeat by Morocco leading to questions about whether this generation of Belgian gold has lost its lustre.

This was seemingly the view of playmaker Kevin De Bruyne, who was quoted in an interview with the Guardian dismissing his side's chances at the tournament because "we’re too old".

They are certainly not the oldest squad at the tournament, that honour goes to Iran, but there are concerns about the fitness and form of some key stalwarts.

Eden Hazard's lack of playing time at Real Madrid this season, where he has started only one LaLiga game, has left him searching for match sharpness, while striker Romelu Lukaku, who came on in the 81st minute against Morocco, is another who is not up to speed.

Martinez pointed more to psychological aspects than physical in his post-mortem following their defeat to Morocco.

"We have to stay together now and become stronger. I know this group, we will be ready for Croatia," he said.

"We haven't been the best Belgium at this World Cup yet. Today I thought we played with the fear of losing. Without the ball we still work for each other but when we have the ball, we don't stand out, we are not ourselves. We have to work on that.”

Croatia's tournament also began with a lifeless performance against Morocco, although the goalless draw provided a platform for them to kick-on against Canada.

They looked far sharper in Sunday's 4-1 win, with Andrej Kramaric's double strike dispelling doubts about whether they lack a cutting edge up front.

A draw would see them over the line but coach Zlatko Dalic ruled out playing for such a scenario.

"We must not accept the option of having only one point to end the match with Belgium," he said.

"There are no easy games (at the World Cup). Belgium need a win but we will also aim for a win."