Argentina, Mexico and Poland may all have been fancied to progress from Group C at the World Cup ahead of Saudi Arabia, but after their stunning win over the Argentines, the Saudis are firmly in the mix ahead of their Wednesday game against Mexico, reports Reuters.

In their five previous participations, Saudi Arabia have qualified for the round of 16 only once, on their debut at the tournament in 1994.

In Qatar, Poland lead Group C on four points, one ahead of Argentina and Saudi Arabia, while Mexico are on one point.

If Saudi Arabia want to progress they will have to beat Mexico, regardless of the outcome of the match between Poland and Argentina.

A draw would mean they need Poland to beat Argentina, while a defeat would make the permutations complicated, as they would need to lose by only one goal while hoping that Poland win their match by a bigger margin. 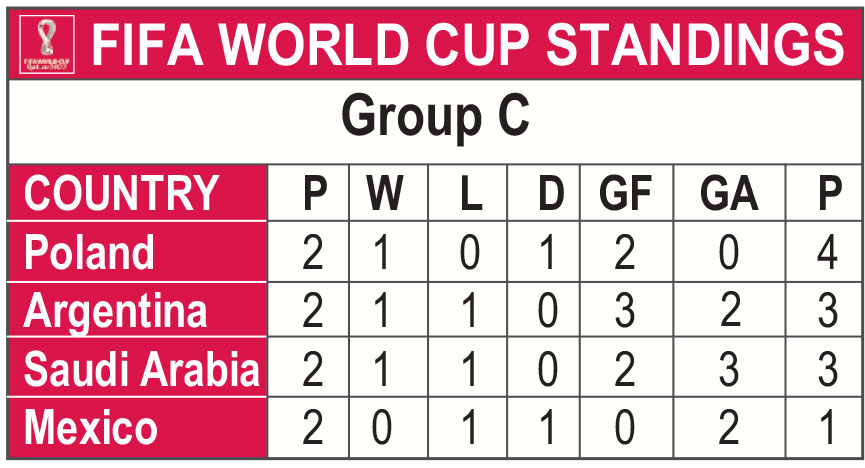 Saudi Arabia stunned the football world when they defeated Argentina 2-1 in their opening group game, only to lose 2-0 to Poland in their second match.

"No one around the world thought that we could play with this level. Yes, in Saudi Arabia we know the players well, but they are unknown to the fans around the world," Saudi coach Herve Renard told a news conference after the Poland game.

"We are still alive."

Things will not be easy for Saudi Arabia, however, given that Mexico also have a chance of reaching the last 16, and for the eighth time in a row in their case.

Mexico need to beat Saudi Arabia by at least a three-goal margin, with Poland not losing to Argentina. If the Copa America champions beat the Poles, it will depend on the final result.

Mexico will be reminding themselves that they have never lost to Saudi Arabia in five previous matches, and won twice with 5-0 and 5-1 results in the FIFA Confederations Cup.

But the Mexicans are struggling offensively and the team did not score a goal in the first two matches against Poland and Argentina. "As long as there are chances, we always need to try," Mexico's coach Tata Martino said. "Saudi Arabia need to win the match and score goals, and so do we."