The odds are heavily stacked against Wales reaching the last 16 ahead of their so-called Battle of Britain against England tonight but if they are to fly home early they will want to do so with pride restored, reports Reuters.

Wales have waited 64 long years to qualify for a World Cup but after conceding two goals to Iran deep into stoppage on Friday it looks like being only a brief stay in Middle East.

That late defeat left Wales crestfallen and at the bottom of group B and needing to beat England for only the 14th time in 104 meetings, a rivalry dating back to 1879.

Even a victory might not be enough to save Wales as they would also need the other remaining group match between Iran and the United States to end in a draw. 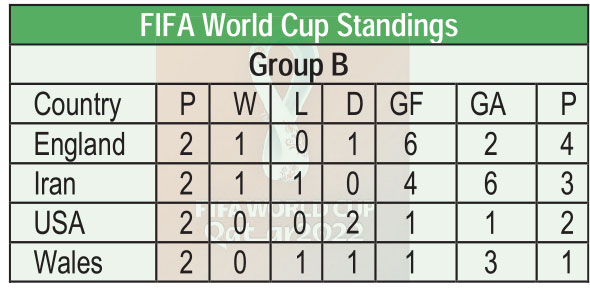 There is one other scenario, one which has never happened before, in which Wales must beat England by four goals, in which they case they would go through to the last 16, whatever the result of the other game, at the expense of England.

While the complexities of the maths are head-spinning, Wales will just want to land a blow on their old rivals, snap a run of six consecutive defeats against them and claim a first win over England since 1984.

For that to happen they will require some magic from their talisman Gareth Bale, who scored an equalising penalty in the opening game against the U.S. but who was rather anonymous in the defeat by Iran.

The prospect of facing England may just spark something special from the 33-year-old former Real Madrid and Tottenham Hotspur player, who is most likely to be playing the last World Cup match of his career.

While England are in a far more comfortable position, leading the group, they went from being so-called world beaters to being booed by their own fans in the space of five days in Qatar -- thrashing Iran 6-2 before being largely outplayed by a youthful U.S. side in a 0-0 draw.

Manager Gareth Southgate began those games with identical starting line-ups, but could well decide to make some tweaks against Wales with Manchester City's Jack Grealish in line for a start and perhaps an opportunity for striker Callum Wilson.

World Cup 2018 Golden Boot winner Kane is yet to score in the tournament and was subdued against the United States having recovered from an ankle injury sustained against Iran.