Apex trade body of Bangladesh's apparel exporters said the problem of power outage nearly disappeared, which is a good sign for the highest export earning industry as well as the economy.

“The problem the export-oriented apparel industry was facing a few days ago has been almost resolved now. Production in factories is now going on in full swing,” said Bangladesh Garment Manufacturers and Exporters Association (BGMEA) Faruque Hassan at a post “Made in Bangladesh Week” press conference. 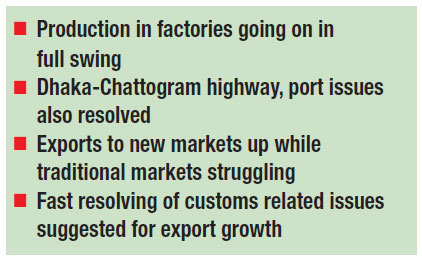 He hoped that the gas problem will also go away once gas comes from Brunei.

Just two weeks earlier, he expressed skepticism that apparel exports may slum along with shifting of order as their production hampered severely because of load shedding or power outage.

The government had to go for strict electricity load shedding after fuel-based power generation went past the capacity of the state coffer due to a big jump in international fuel price.

Besides, the problems of Dhaka-Chattogram highway and Chattagram Port have been resolved as well, which can eventually help raise the country’s exports, the BGMEA president informed.

About the current apparel order situation, Faruque Hassan informed that some factories have regained orders while some failed to do so. He reiterated his skepticism that the increase in order may not sustain.  However, he was upbeat that exports to new destinations have grown by 17 percent while exports in conventional key markets are struggling.

In order to enhance exports, Hassan suggested making decisions faster with regard to customs, bonds and VAT to facilitate the apparel sector to grow more.

He informed that the main objective of the Made in Bangladesh Week was to brand Bangladesh to the whole world and apart from branding local industries, there was also a special focus to highlight the environment-friendly garment factories.

BGMEA has a target to raise global share of Bangladesh's apparel exports to 8 to 14 percent from existing 6.26 percent. It has also prepared a roadmap to reach that goal, BGMEA president said.

Through the observation of the week for the first time in the country, Bangladesh has been able to fetch more export orders while finding new export destinations like Iraq and some other countries, Faruque Hassan added.