A technical cooperation agreement has also been signed with an Indian firm for completing the process quickly.

The comments were made at the Chattogram divisional representatives’ meeting of Bangladesh Jeweller’s Association (BAJUS) held at hotel ‘Radisson Blu Chattogram Bay View’ on Monday.

Addressing the programme, the BAJUS chief put emphasis on unity among the jewellers of the country to realise their demands.

He said the Bashundhara Gold Refinery Limited is expected to start production in March next.

Sayem Sobhan Anvir urged the BAJUS members to keep their necessary documents up-to-date to get various benefits from the government.

He also called upon all to keep trust on the government and Prime Minister Sheikh Hasina. “As some 40 lakh people are engaged in the industry, the Prime Minister will facilitate it. Keep trust on her as something good will happen,” he told the BAJUS members.

“The government is ready to provide all facilities if the gold is produced in the country. All the jewellers of the country must be united to achieve great things for the jewellery industry. That's why keep trust on us, don't lose hope,” the BAJUS President added.

Speaking at the programme as a special guest, CSE Chairman Asif Ibrahim said the agreement signed with ABG Limited, a concern of country’s largest industrial conglomerate Bashundhara Group, is a milestone in the country’s history.

The business conglomerate has set a direction for the sector through signing the agreement, he observed.

ABG Limited has bought 25 percent shares of the CSE. The capital market will be an instance of the use of information technologies and people will invest there, said Asif.

“The prudence and farsightedness of the daughter of Father of the Nation Bangabandhu Sheikh Mujibur Rahman has brought us to this path of progress,” he said.

The CSE Chairman also informed that the commodity exchange activities at the CSE will start with gold and the name of BAJUS will remain written with golden letters.

CSE Director Major (retd) Emdadul Islam said unrefined gold will be brought from abroad and those will be refined in Bangladesh.

“New industries will be developed with the by-products to be got during the refining process. It’s an incredibly brave initiative by Bashundhara Group,” he said.

“History is not written in a day. Surely, the name of Bashundhara Group will be written in the history for this initiative,” added Emdadul.

They’ll build the country in such a way they make the gold ornaments,” he said urging the jewellers to become men of gold.

FBCCI Vice-President Amin Helali said, "I haven’t seen a united position of BAJUS members while performing at the appeal board of their election.”

“Now, there’ll be gold processing industry in Bangladesh. It’s good to hear that gold will be exported from Bangladesh. I think this jewellery industry will be successful and overtake the garment industry within five to 10 years,” observed the business leader.

BAJUS Standing Committee on District Monitoring Chairman Dr Dilip Kumar Roy said the lost glory of the gold industry will be revived under the leadership of its President Sayem Sobhan Anvir.

He said 4-5 gold jewellery factories are at the final stage of starting production in Dhaka. Everyone should come under the umbrella of BAJUS to save this industry.

“BAJUS had many crises in Chattogram but we’ve overcome those. We’ve formed new committees in 64 districts and the number of its members increased to 40,000 from 6,000-7,000,” said Dilip.

“Our gold will be exported abroad and it’ll overtake the garment industry in the coming days,” he hoped.

BAJUS Vice-President Gulzar Ahmed said they will be successful if they follow the disciplines set by the BAJUS President.

“At the beginning of the year, the President organised the BAJUS fair. It was a beautiful fair and the President assured that the fair would be held every year,” he said.

Another Vice-President Anwar Hossain said the jewellery industry is getting the touch of modernity. “We’ll export gold in the coming days,” he said.

The district and upazila leaders greeted the BAJUS President with crests for attending the representatives’ meeting for the first time in Chattogram. 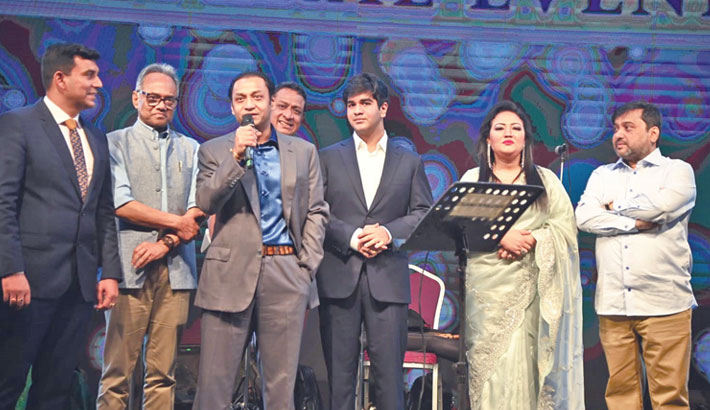