Bangladesh had their moments but failed to hold their nerves in the end as they suffered a seven-wicket defeat to Pakistan during their last match of the ongoing tri-nation T20I series at Hagley Oval in Christchurch, New Zealand on Thursday.

The Tigers had nothing to lose in their last match of the tournament having conceded defeats in all their previous three matches and were already out of contention to reach in the final. 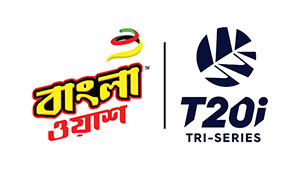 Skipper Shakib Al Hasan struck 68 off 42 balls – his successive fifty in the ongoing series – while Liton Das made a brilliant 69 off 42 balls as Bangladesh posted 173-6 in their 20 overs – a much improved batting performance than their previous outings in the series – after they opted to bat first against Pakistan.

Pakistan openers – Babar Azam and Mohammad Rizwan gave them a rollicking start by putting up a 101-run stand in 12.2 overs before pacer Hasan Mahmud (2-27) took two wickets inside three balls to bring Bangladesh back in the match.

Rizwan, who was dropped by Mohammad Saifuddin on 32, then added 64 runs with Mohammad Nawaz (45 not out) before the former was dismissed by Soumya Sarkar after making 69 off 54 balls.

Pakistan, which needed only eight runs to win in the final over, completed the victory with one ball and seven wickets to spare as they reached 177-3 after Nawaz hit the winning boundary off Saifuddin.

“It’s been difficult but I thought we played our best cricket today. Could have scored a few more runs in the end, but such things do happen,” Shakib said after the match.

“We played well in the middle overs which we were lacking, it’s up to us to perform well in the upcoming World Cup. If we had been told we would get 173 at the start of the innings, I would have taken it gladly.

“We are very clear on the team we’ll play in the World Cup, so that’s good. My job is to score runs for the team, the bowling is not up to the mark though, that’s one area I would like to improve. We have improved a lot through the tournament and that’s something positive for us,” he added.

Pakistan will now face the host New Zealand in the final at the same venue today.

Earlier, Bangladesh made two changes from their last match defeat against New Zealand as they brought in Taskin Ahmed and Hasan in the places of Ebadot Hossain and Mosaddek Hossain.

The Tigers lost opener Soumya (four) in the third over of their innings before Najmul Hossain Shanto followed Soumya after making 12 runs.

Shakib and Liton then added 88 runs for the third wicket to take Bangladesh score over the 120-run mark before Liton was dismissed after completing his seventh T20I fifty.

Shakib continued his good work with the bat and completed his 12th T20I fifty before he was dismissed by pacer Naseem Shah (2-27) eight balls before the end of Bangladesh innings.

Pacer Mohammad Wasim Jr took two wickets in the final over and conceded only three runs as Bangladesh had to satisfy with a below 180-run total which was not enough to defend in the end.