The study titled 'Assessment of Salt Content and Label Compliance of Commonly Consumed Processed Packaged Foods of Bangladesh’ was conducted by the National Heart Foundation of Bangladesh.

The findings of the research conducted with the support of Resolve to Save Lives, USA were disclosed at a seminar at CIRDAP auditorium in the capital on Wednesday. 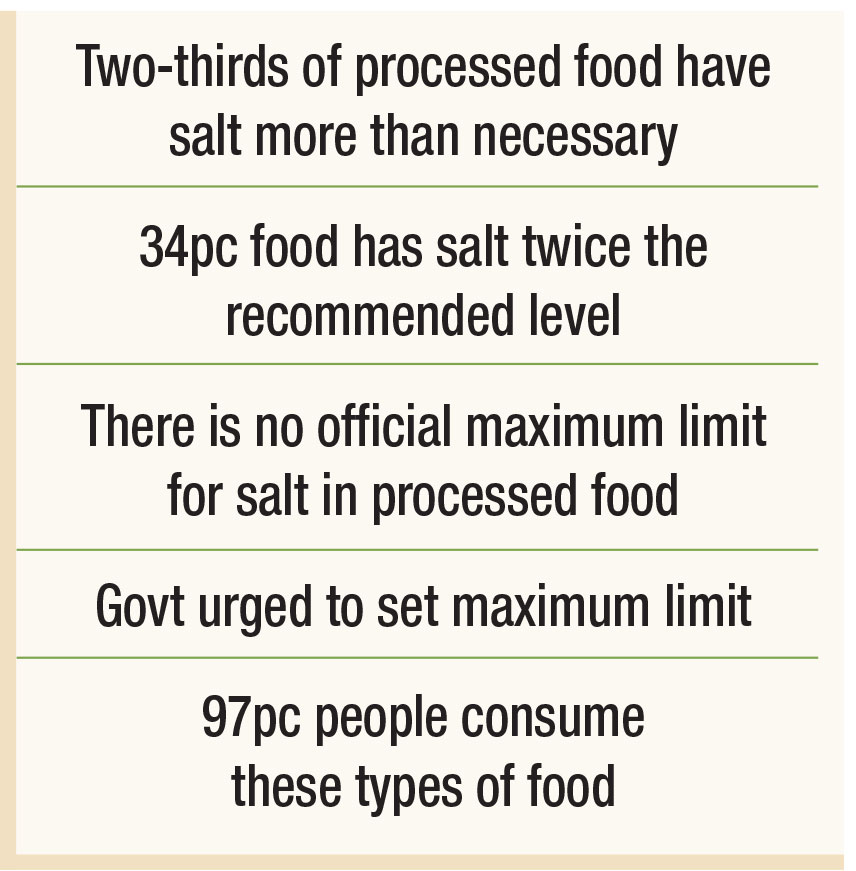 According to the study, 61 percent of popular processed packaged foods such as biscuits, chips, chanachur, noodles, instant soup, jhalmuri (hot, spicy puffed rice), pickles and chutney contain more salt than necessary as up to 750 mg salt per 100 gram food is safe.

Besides, there is no official maximum limit for salt in processed food in Bangladesh. As a result, companies add as much salt as they want to their products.

However, as per the Packaged Food Labeling Regulations 2017, it is mandatory to indicate the amount of salt present in the processed food on the package label. But 44 percent of the foods have more salt than the amount stated on the packets.

Research has shown that 97 percent of people consume these types of food. On average a person consumes these types of foods 15 times a week i.e. more than two times a day. And excessive salt intake is associated with the risk of high blood pressure, cardiovascular disease, stroke and kidney disease.

The study said in order to prevent these diseases, the government should take initiative to set maximum limit of salt in the processed food in accordance with the guidelines of the World Health Organization.

It should also ensure that nutritional information is properly mentioned on the packets of food products so that a consumer can easily understand whether the food is healthy or unhealthy, it added.

PM working for people of all religions: CHT Minister