Bangladesh's export-oriented readymade garment industry targets to hold 10 percent share of the global apparel market by 2025, to be supported by a gradual shift to non-cotton items and efforts to explore new markets.

Bangladesh Garment Manufacturers and Exporters Association (BGMEA) President Faruque Hassan informed this at a press conference at BGMEA office in Dhaka on Saturday.

Currently, Bangladesh is the second-largest garment exporter after China, but its share in global readymade garment is only 6.8 percent.

“We have a plan to raise our global market share to 8 percent by 2022 and to 10 percent by 2025. For this, we’re trying to increase production of manmade fibre items,” Faruque Hassan told the media.

The press conference was organised to highlight the details of the "Made in Bangladesh Week" to be held in Dhaka in November.

Hassan said Asian markets such as India and Japan will be the major export destinations for Bangladesh as it looks to earn $100 billion from the sales of apparel items in the global markets by 2030.

But to enhance Bangladesh’s exports to India, BGMEA suggested lowering pressure on Benapole port alongside enhancing capacity of other land ports. 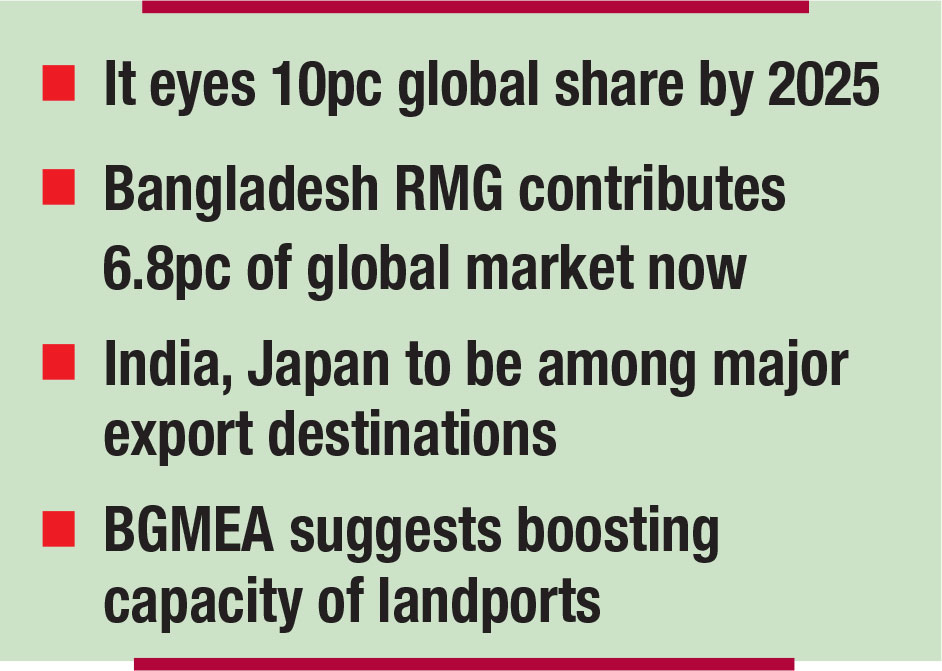 BGMEA is going to hold Made in Bangladesh Week to present the country’s apparel industry to the whole world as a sustainable and innovative industry, and brand Bangladesh.

In reply to a question, the BGMEA president claimed that they were trying to change the Bangladeshi RMG industry’s  image from cheap labour-based to competitive labour-based industry to the world.

At the same time, the BGMEA leader acknowledged that it is necessary to increase exportable goods to successfully face the LDC graduation challenges as Bangladesh is going to graduate from the least developed country status in 2026.

When asked about India’s allowing transit for Bangladeshi shipments, he said, "This will play a positive role in increasing Bangladesh's exports."

As a fashion-based and time-bound industry, RMG industry needs many shipment options and India's free transit offer will help the sector, Faruque said, adding that India has offered ships and containers facilities as well.            "To sustain the industry’s growth, political stability is necessary during national elections," BGMEA president emphasised.

He predicted that Bangladesh may see negative growth in apparel shipment in the next three months due to decline in orders by 20-30 percent.

BGMEA demanded that at this moment, over 80 percent of export earning industries need an uninterrupted electricity supply and reversal of the hike in Advance Income Tax (AIT). Not only that, the apex body of RMG exporters in the country also think that political stability is required to make the growth of industry sustainable.

The BGMEA president urged the factory owners not to lower prices of products for the importers as there was a slight drop in cotton prices on the global market.

The press conference was also attended, among others, by BGMEA vice-president Shahidullah Azim.