Brigadier General Md Main Uddin has completed 100 days in office as the director general of the Fire Service and Civil Defence (FSCD) Directorate. During this short period in office, he has taken many initiatives to modernise the force and enhance its capacity.

He has also taken initiative to award posthumously the 13 FSCD members who sacrificed their lives while battling the devastating Sitakunda depot fire recently with the National Hero/Agnivir title.

The FSCD chief has set up ‘Bangabandhu Corner’ in Mirpur so that the newly appointed firefighters can learn about the great Liberation War and Father of the Nation Bangabandhu Sheikh Mujibur Rahman and get inspired to serve the country imbued with the spirit of Bangabandhu’s ideals and the Liberation War.

In an exclusive interview with the Daily Sun, Brigadier General Md Main Uddin talked about various initiatives and future plans.

DS: Soon after you have joined the FSCD, a major fire accident took place at the BM Container Depot in Chattogram. Although new, you tackled it quite efficiently. Thirteen of your workers lost their lives in the fire. Would you please say about this accident, future preparations to tackle a fire of such intensity etc.

FSCD DG: It was a big challenge for me because you know I was very new to the fire service. I took charge on May 25. And this accident happened on June 4. When I went to the spot on the morning of June 5, I realised that firefighters who were seriously injured could also die. Instantly, I sought cooperation of the army chief for their better treatment at Combined Military Hospital (CMH). As he graciously agreed, all the injured firefighters were admitted to Chattogram CMH. Besides, two seriously injured firefighters were shifted to Dhaka by an army helicopter. I think we have avoided deaths of more firefighters because of this. For this, I express my sincere gratitude to Prime Minister Sheikh Hasina, home ministry and the army chief on behalf of all the members of the fire service.

DS: In recent times, major fire accidents are taking place in our country. What is the ability of the fire service to deal with those?

DS: In some recent fire incidents, we have seen many units working but taking a long time to douse the fire. What is the reason behind this? What are the challenges at the place of occurrence? 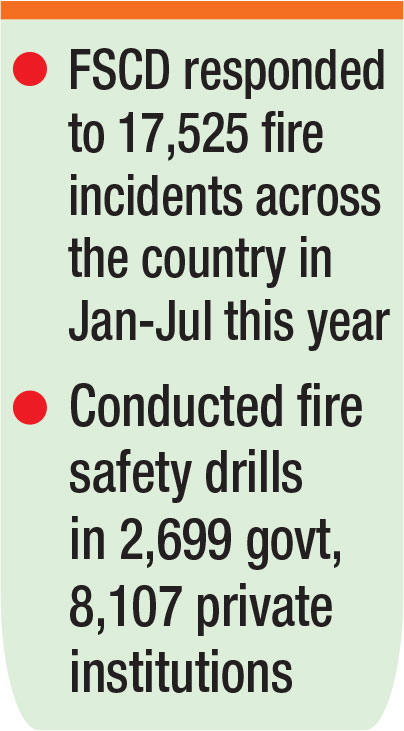 FSCD DG: Our workers face several challenges at the accident sites. Our normal work is often disrupted due to the rush of overenthusiastic crowds. Sometimes the accident site cannot be accessed from any direction. Water scarcity is also a major problem. If the source of water cannot be confirmed, we have to bring water by vehicles from far away. Besides, due to hanging wires, narrow roads, illegal or unplanned electrical installations and gas lines existing at the accident site in the case of slums, our normal work speed and rhythm are disturbed. Everyone should allow the fire service to function without interruption after an accident occurs.

FSCD DG: In 2009, the fire service had only one 47-metre long vehicle to work in a multi-storey building. There are now a total of 26 ladder trucks for fighting a fire and conduct rescue operations in high rises.

The fire service has now the ability to extinguish fire and rescue people up to 64 metres or 20 floors. Besides, a 68-metre high ladder vehicle is waiting to be added to the fire service fleet. In the future, the capacity of fire service will be expanded up to 22 floors.

DS: After the horrific container depot fire at Sitakunda, doubts have arisen among people about the condition of other depots in Chattogram. Have you had any inspection or survey activities in this regard?

FSCD DG: After the fire incident at BM Container Depot in Sitakunda, inspection activities have been intensified. Instructions have been given to visit other depots in Chattogram to see their safety situation. Under this, out of the 25 depots of Chattogram, 23 have been inspected except for the two closed ones. Of these, four organisations have approved safety plans, but two of them do not comply with safety requirements. None of the other 17 establishments has an approved safety plan and fire safety standards are unsatisfactory. Every establishment has been given notice to adopt safety plan from fire service and implement fire safety measures.

DS: FSCD is a service-oriented organisation. Fire service can be seen wherever there is an accident. However, many do not know what other services are available from this institution. Tell us about your service areas.

In addition to regular activities, the workforce of this institution is participating in joint anti-terrorist operations. Recently, FSCD has got involved in multi-dimensional services such as deployment of units at launch terminals for the safety of people during Eid and festivals and repair storm-damaged roads etc.

DS: You completed 100 days in office on Friday. What do you think about the organisation? What kind of steps are you taking?

We have taken initiative to award posthumously the FSCD 13 members who sacrificed their lives while battling the Sitakunda depot fire recently with the National Hero/Agnivir title. We have extended Eid greetings to the martyrs of the fire service who sacrificed their lives in the great Liberation War and in various operational tasks. Efforts are being made to provide lifetime ration to workers.

Initiatives have been taken to start MI rooms in all departmental offices to ensure healthcare for the officers and their family members. MI rooms have already been launched in Dhaka’s Mirpur training complex and Khulna division. It has been decided to register the acquired land for FSCD offices, including fire stations, in the name of its director general in order to bring discipline in the matter.

DS: Is it true that the risk of accidents is increasing with rapid urbanisation, industrialisation and economic prosperity in the country?

FSCD DG: Yes, it is true that the risk of accidents is increasing with rapid urbanisation, industrialisation and economic prosperity in the country. Fire service responded to 17,525 fire incidents across the country from January to July this year. In the last seven months, 664 boat accidents, 5,729 road accidents and 1,700 other accidents were handled by fire service. In all those accidents, 1,375 people were killed and others 9,680 injured.

DS: Is there any programme to make people aware of fire and other disasters? If so, what are those?

In order to make those concerned with these institutions aware through drills and inspections, necessary suggestions for correcting the defects of the institutions and buildings have been provided. Basic training was imparted to a total of 90,720 people in fire safety through 2,489 courses to strengthen fire safety.

Besides, 313 government and 1,028 private buildings have been surveyed. We have also taken initiatives to create and promote TVCs, short films, apps etc. with the aim of creating awareness among people.

Mentionable that 64,960 people have been trained in fire safety through 1,624 training courses for the safety of garment industry establishments from January to June this year. During the time, 1,065 exercises were conducted and 24 institutions were surveyed.

DS: Are there any initiatives to modernise the training standards? I heard there will be a fire service academy.

Steps have been taken to get the diving chamber test done by Bangladesh Navy before being appointed as divers. Besides PT-parade in the basic training of drivers, it has been decided to conduct 33 percent training in driving alone from now on. Need-based basic training system has also been taken for the employees of river fire station’s master driver and engine driver.

We have acquired 100 acres of land in Munshiganj to build the Bangabandhu Sheikh Mujib Fire Academy with modern facilities and simulators for training. International quality training can be ensured there. I believe that future fire service training will be of modern, advanced, realistic, timely and effective.

FSCD DG: Work is underway to formulate an organogram of having manpower of more than 30,000 as per the desire of the prime minister. We have prepared a report under a World Bank project in this regard. It is now under active consideration of the Ministry of Home Affairs.

DS: The chief of FSCD has been drawn from Bangladesh Army. Would you please express your feelings?

Acts of sabotage feared during Puja

All set for Durga Puja celebrations

US wants Bangladeshis to choose their own govt freely: Haas

Pedestrians suffer as the underpass road at Shanir Akhra in the capital has decayed and lies in this bad condition. The photo was taken on Thursday. -Md nasir uddin