US energy giant Chevron Bangladesh has received approval for expansion of the Bibiyana gas-field with an additional 60 Square Kilometers "flank" area, aimed at producing low-cost gas from local fields to meet a severe energy crisis in the country, a top official said.

The approval came up from the Energy and Mineral Resources Division (EMRD) after Prime Minister Sheikh Hasina approved a summary to extend the areas of the Bibiyana field ahead of the US company's 25th anniversary in Chevron Bangladesh venture.

"The EMRD has decided to allow Chevron of the 60-square-kilometre "flank" area outside its existing contract zone at the north of the Bibiyana gas-field," Petrobangla chairman Nazmul Ahsan told the Daily Sun.

“We are expected to sign a side letter agreement (SLD) with Chevron Bangladesh to explore the flank area under Bibiyana gas field within 15-20 days,” he said on Thursday. 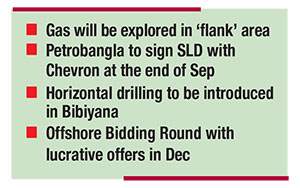 Petrobangla chairman said JICA had a prediction to deplete the Bibiyana gas field with overall gas output to 1900mmcfd now.

“But, the JICA survey makes it wrong and Bibiyana proves additional gas prospects with overall gas output of 2350mmcfd from local gas fields,” he pointed out.

Among the Chevron-operated gas-fields, Bibiyana is the biggest producing gas field that outputs around 1481.3mmcfd of gas, followed by Jalalabad field with natural gas pumps out of around 182.3 mmcfd and Moulvibazar having production of around 17.3 mmcfd.

Currently, the Bibiyana's lifespan is expected to continue till 2037 whereas Jalalabad and Moulvibazar will end in 2034 and 2039 respectively.

Chevron plans fresh investment to initially drill wells no B27 and well no B28 at the existing areas and it will also drill well B29 at flank area, sources at Bibiyana Gas Field said.

Sources concerned said the drilling will be started in the first quarter of 2023.

Earlier, the US company had sought several times to conduct horizontal drilling but never received approval. But, the current natural gas crisis has forced the government to allow it this time, the official sources said.

According to the sources concerned, the US energy giant is now conducting a survey in the Surma basin of Bangladesh's largest gas prospect at Block 11, 12, 13 and 14.

Once, Chevron may get prospects at Block-11 in an onshore field, then Chevron also intends to get the field under unsolicited deal. The blocks 12, 13, 14 are now operated by the company.

Previously, Chevron has received Jalalabad gas field under block-13 under an unsolicited deal.

Onshore Block 11 is one of the two blocks that were kept ring-fenced for development by state-owned BAPEX.

MOECO had carried out a joint study along with Petrobangla, BAPEX and Bangladesh Petroleum Institute and spotted two prospective locations -- Madarganj and Jamalpur in blocks 8 and 11.

Petrobangla chairman said that Wood Mackenzie has submitted their report on offshore gas exploration in the Bay. He added, “We will invite bids for 24 offshore blocks in December.”

The top Petrobangla official also found great prospects at Bhola gas and plans to explore the river area too as great prospect prevails in greater Bhola.

Forex market may be more volatile unless reforms are done

Stock investors urged to learn AI to gain in market