Bangladesh is currently facing the pressure of imported inflation which may continue for some time until the international market and Ukraine war situation improves, said experts.

Economists, policymakers and business leaders came up with the view at a discussion on Bangladesh’s current economic challenges, organised by Economic Reporters’ Forum (ERF) in Dhaka on Sunday.

The discussants, however, expressed different views on the pressing issues of energy price hike, volatile forex market, ease of doing business and other macroeconomic situations.

“To some extent, equilibrium may be established in external trade in near future with an expected fall in imports coupled with rise in exports and remittance, but nothing has been done to combat inflation,” he said. 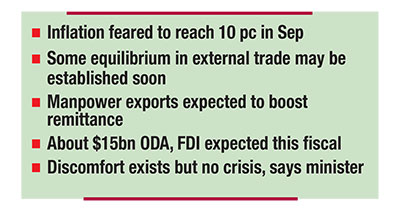 Dr Mansur added that the government is trying to address inflation by increasing supplies, but rice price is likely to rise further because of low production and insufficient imports.

He called for a full overhaul of the revenue system, citing that the government has to largely depend on borrowing from overseas sources as well as local banking system to implement current fiscal’s budget.

State Minister for Planning Dr Shamsul Alam termed local economists as “skeptical” saying that they do not see positive signs of Bangladesh’s economic development and resilience during the crisis moment, while foreign analysts can see that.

“Our economists are efficient in expressing skepticism. They make many projections which have no link to the ground realities,” he repented, referring to an analyst’s fear of 5 million people’s death in the country during the Covid-19 pandemic.

He said the inflationary pressure may continue for next one or two months as inflation usually remains high during July-October period in Bangladesh.

He acknowledged sufferings of fixed income people due to rising inflation, but did not agree with the notion that the government has done nothing to address inflation.

“If the government has done nothing why the policy rate has been raised?” he questioned.

“There is some discomfort in the economy now, but no crisis,” Dr Alam claimed, citing an IMF official’s recent observation.

He expected a surplus in the Balance of Payment (BOP) situation in 2022-23 fiscal year with the argument that inward remittance will bounce back to $23 billion this fiscal as the country sent abroad some 1.28 million.

Dr Alam admitted that poverty reduction may take some time, but the government has no planning weakness and the economy is on the right track for successful LDC graduation and SDGs implementation.

Central Bank Chief Economist Habibur Rahman said the country has now fallen prey to imported inflation; not an inflation created by local factors like low food production or other issues.

The economist hoped that the exchange rate will come down soon being supported by the measures the central bank is taking.

The business leaders blamed NBR for its complex system and policies which are harassing for businessmen and undermining ease of doing business situation.

BKMEA senior vice-president Mohammad Hatem warned that the gas crisis may eventually push up imports further as the knitwear manufacturers are likely to need to collect raw materials from foreign sources.

He also observed that the repayment period of stimulus loans was very shot, putting extra burden on the businessmen.

Former president of Dhaka Chamber of Commerce and Industry (DCCI) Abul Kashem Khan put more emphasis on the country’s achieving energy security by next 10 to 15 years through a comprehensive master plan.