The crane was unfit, operated by helper

The crane that caused a terrible tragedy in Uttara area of the capital on Monday was unfit and was operated by an inexperienced helper.

A box girder of the Bus Rapid Transit (BRT) project fell from the crane on a car while lifting, leaving five people dead.

The girder weighing 60-70 tonnes was being carried by the old crane having a carrying capacity of only 45-50 tonnes.

Director (Legal and Media) of Rapid Action Battalion (RAB) Commander Khandaker Al Moin provided the information at a briefing in the capital on Thursday.

The elite force briefed journalists after arresting 10 people, including the crane helper, Rakib Hossain, in connection with the tragedy.

Moin said, “Girder lifting should have been done at night, but it was done at daytime. The work of girder lifting began at about 2:00pm on August 15. Operator Al Amin lifted a girder by the crane and then he got down from it.”

“After that, Rakib who joined the project work as the helper about three months ago and has no driving licence operated the crane, lifted the box girder and tried to carry it to another place.       But he lost control over the crane and the girder fell on the private car,” he said.

On Al Amin, the RAB officer said he had no driving licence to operate such a heavy crane while the fitness certificate of the crane got expired.

The crane, which was being run from 1996-1997, had the highest and overall capacity of carrying 80 tonnes earlier, but at present it could carry only 45-50 tonnes comfortably, he said.

On Zulfikar, Moin said that he passed HSC, but he was appointed as the safety engineer.

He had the duty of maintaining traffic from Azampur to Airport in the BRT project area though he had no training on this.

Traffic workers Rubel and Afroj who were hired from unlicenced Four Brothers Guard Service had no training to control traffic, said Al Moin.

He said there were no control and safety measurements to shift heavy girders from one place to another along with shortage of manpower that day.

According to the RAB director, those who were working in the project there the day had negligence too.

There should have two signalmen, counter load system and alternate crane during the girder lift, but not.

On the arrest of Iftekhar and Azhar of Ifskan Company, Moin said they hired the crane, its operator and helper from Build Traders Company without scrutinising the capacity and fitness of crane.

He said Manjur, who had the duty of total management of the construction farm CGGC’s work, and Zulfikar brought the unfit crane, inexperienced helper, licence-less  driver, unskilled traffic men and other heavy equipments from Ifskan, Four Brothers Guard Service and others.

In response to a question why the offices of BRT, Chinese men of CGGC and four consulting committees comprising some government engineers were not arrested, Moin said that a probe committee was working to dig out all those having negligence.

“If the negligence of others is found, RAB will try to bring them to book,” he said. 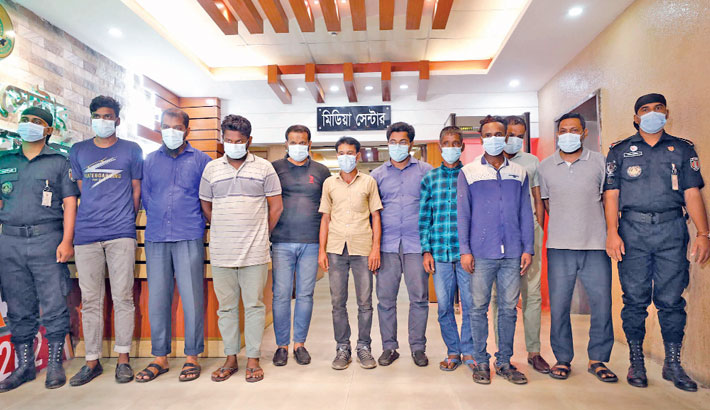 RAB personnel on Thursday produce 10 people, including crane helper Rakib Hossain, before journalists after arresting them in connection with the incident that left five people dead after a box girder of BRT project fell on a private car from a crane in the capital’s Uttara on Monday.      —SUN photo

10 fingerprints to be required to vote: EC