Raihan Rafi is a most-talked about filmmaker of the country at this time. His movie ‘Poran’ continues to dominate theatres in its sixth week. Rafi has recently announced that his new film ‘Damal’ will be released in theatre on October 28. The trailer of the movie was also released on Tuesday.

Actors Siam Ahmed, Bidya Sinha Saha Mim, Sariful Razz, Shahnaz Sumi and others will be seen acting in the movie.

Raihan Rafi hopes that the movie ‘Damal’ will be his best movie. Talking to The Daily Sun, Rafi said, “The film ‘Damal’ is my dream project. I’ve made the movie inspired by the history. The movie is based on true events and follows the story of legendary Shadhin Bangla Football Team. As a result, it was difficult to create a football team like Shadhin Bangla Football Team and an environment of the liberation war. It was a long journey and it took four years to complete the movie. Siam and Razz practiced football for six months for the movie.”

“The trailer of the movie was released on Tuesday. Since then, we have been getting huge positive response from the audience. It is a good sign for a movie. I hope, ‘Damal’ will outperform the movie ‘Poran’ in box office,” he said.

“We started the promotional activities for ‘Damal’ on Tuesday with the release of its trailer. The film contains five songs. Popular singers Momtaz, Kona, Imran and Pritom Hasan have lent their voice to the tracks. We have a plan to arrange concerts at different districts in the country with the singers. ‘Poran’ has brought a new wave of hope to the film industry. The film is still running houseful in some theatres. The movie ‘Hawa’ is also going well. ‘Damal’ will enhance this journey of Bangla movie,” he further said.

‘Damal’ is the fourth film of Raihan Rafi. His other three films are—‘Poramon-2’, ‘Dohon’ and ‘Poran’.

The film ‘Damal’ has been conceptualised by Impress Telefilm and Channel i Managing Director   Faridur Reza Sagar.  Raihan Rafi and Nazim Ud Daula have jointly scripted the production.

The story of the film is based on legendary Shadhin Bangla Football Team. Formed in June 1971, the Bangladeshi football team played a total of 16 matches in different locations, raising around BDT 5 lakh which was donated to help fund the liberation war. 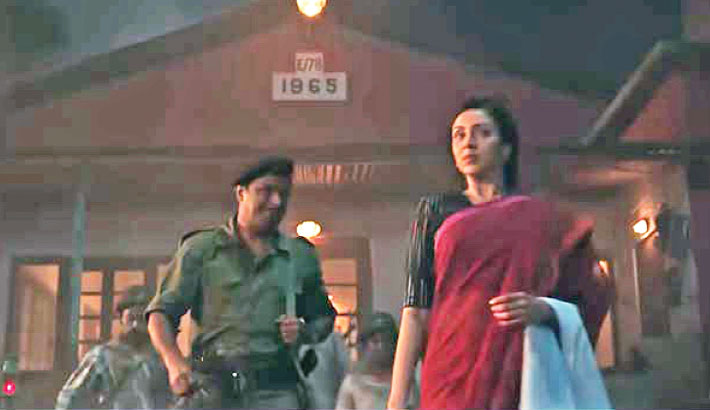 A scene from the movie Damal