George Washington recognized his wife Martha as “an unalterable affection which neither time or distance can change”; Mahatma Gandhi considered his wife Kasturba as “the power behind his force”; Lenin viewed his wife Nadezhda Krupskaya as “a revolutionary wife and comrade”; Churchill regarded his life “impossible without his wife Clementine”; Martin Luther King Jr. appraised his wife Coretta as one “without whose love, sacrifices, and loyalty neither life nor work would bring fulfilment”; and Mujib discovered in his wife Sheikh Fazilatunnesa “a woman to depend on”. This dependence helped him take up the struggle for independence. Really and truly, she was his muse, wife, companion and comrade and reliance on her has been one of his main motivations.

Bangabandhu himself would say: “I have two dependencies in my life. One is my self-confidence, and the other is my wife.” Whatever he has achieved in his life can be attributed both to his self-confidence and his wife’s continued support. In his long struggle for independence he had been accompanied by the glorious woman, Sheikh Fazilatunnesa Mujib.

There is an old famous saying that behind every great man there is a great woman. In case of Sheikh Mujib, his great wife Sheikh Fazilatunnesa was the woman. Her life was intimately connected with the life of Mujib. The blood of the traditional Sheikh family of Tungipara was flowing through the veins of both of them. When Sheikh Fazilatunnesa was only three years old and Mujib was thirteen, their legal guardians decided to get them married. Later, when she was eight, Mujib married her and brought her home. The life of Sheikh Fazilatunnesa revolved around Mujib, the handsome young man whom she had as her life partner as early as her play with dolls was over. She immersed herself in love with Mujib. Mujib's joy was her joy; Mujib's trouble was hers. She got the warmth of Mujib’s passion for liberating the people of Bengal. 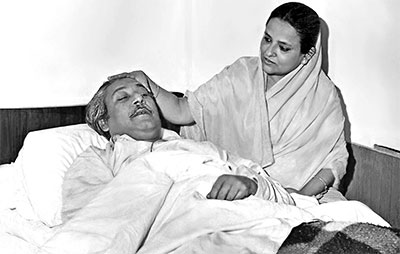 She was also seized by the passion for freedom. So, she accepted the uncertain life with great fortitude. Unlike other girls in the society, she resigned herself to a risky life. One cannot even imagine how difficult it was to bring up the children with a husband one fourth of whose 55-year life was spent in prison. Every time when Mujib's arrest warrant came, she would pack his bags and handle the situation so tactfully that the father and children would not be upset. On the day of the weekly visit, she would go to the jail with her children with food carried in tiffin carriers. Mujib used to eat with his coprisoners.

Bangamata also made history in cooking with her own hands and feeding people. During Bangabandhu's lifetime, hundreds of Awami League leaders and activists were fed on food cooked by her at Dhanmondi number 32. Whenever something good was cooked, Bangabandhu would bring uninvited guests for a meal with him. Bangamata did not have a bit of bother with it all. She never discouraged Bangabandhu about it. While visiting the prison, she used to take notebooks and pens with her and urge him to write whatever comes to his mind. She wanted by all means to make her husband’s lonely life as comfortable as possible, as meaningful as it could be. Such a caring and prudent wife Bangamata was to a husband like Bangabandhu.

Bangamata was in fact the main inspiration behind the works Bangabandhu created during his imprisonment which have received wide acclaim at home and abroad. Bangabandhu has admitted that at some critical junctures in his political life, when he went through times of uncertainty and indecision, Bangamata came to his side like a faithful friend and helped him to make the right decision. Two such moments have gone down in the annals of history. The first event happened when the prisoner Bangabandhu was supposed to be released on parole in the Agartala Conspiracy Case and offered to sit in a round table meeting in Rawalpindi. Many influential Awami League leaders like Ataur Rahman Khan, Abul Mansur Ahmed, Tofazzal Hossain and others acceded to it, but Bangamata stood directly against it. She sent a message to the jail forbidding Mujib to agree to the conditional release. Mujib did so and because of the uncompromising decision, he was established as the paramount leader of the country and eventually was released along with the other accused.

The second incident happened immediately before the historic March 7 speech. That was an extremely critical moment. There was widespread agitation against the suspension of the inaugural session of the national assembly. The youth of the party had been applying repeated pressure to make the final declaration of independence on that day. Meanwhile, the marauding Pakistani army was ready and waiting to swoop on Bengalis. The world was keenly observing which way the wind would blow. Had Mujib made a formal declaration, his UDI (Unilateral Declaration of Independence) could have provided evidence in support of Yahya’s allegation of secession against Mujib. On the contrary, if Mujib’s gesture of pacificism was mistaken for a sign of weakness, the Pakistani side would take advantage of it. Mujib was running a fever. Before leaving Dhanmondi 32, Bangamata came and stood in front of Mujib. She had known Mujib for thirty-three years of married life and could feel that his mind was in a state of turmoil.  She said calmly, “You don’t need to listen to anyone. Speak your mind. Say what comes out of love for the country, for the people of the country.” The rest is history.

Brig R P Singh VSM, a retired Brigadier of Indian Army and a Bangladesh Liberation War veteran in an article written in commemoration of what he calls “My Friend Shaheed Sheikh Kamal” writes about Bangamata’s influence on Bangabandhu which he came to learn directly from Sheikh Kamal whom he was associated with for sixteen weeks during the liberation war. As he puts it: “Sheikh Kamal narrated how his mother, in the absence of his father, had looked after him and his brothers and sisters, and also ran the party amid grave worries and tensions. She faced all the hardships with tremendous courage and great composure. She also indirectly provided the leadership and necessary directives to Awami League cadres in the absence of Sheikh Mujib. She even motivated Sheikh Mujibur Rahman before he made his historic speech at the then Race Course ground in the city on March 7 in 1971. Sheikh Kamal recalled the important role played by his mother in the country's politics by offering constructive advice to Bangabandhu throughout his political life, especially during his 14 years of imprisonment.”

The black August night descended on the Dhanmondi 32. The killers surrounded House No 10. Bangabandhu woken up by the sound of gunshot could realise the situation. He tried to contact the military officers. Sheikh Kamal was killed downstairs. In this horrible situation, Bangamata sent Bangabandhu's panjabi and spectacles. As he opened the door and went out, he was shot dead. His body got riddled with bullets. While the killers were taking others down, Bangamata stood beside her husband's dead body with a stubborn resistance to move. The white panjabi turned red with fresh blood on the chest. Black glasses and pipes turned bloody. Bangamata burst into tears. “I won’t go anywhere. I won’t. Kill me here.” The killers did her bidding.

Those hateful killers of the black night could not understand the meaning of the tears welling up in the eyes of Bangamata. Neither could they realise Benjamin Disraeli’s dictum— ‘assassination has never changed the history of the world’.  The mortal life of this great woman might be snatched away by the killers’ bullet. But her unswerving loyalty to her husband Mujib and her outstanding contribution to the creation of Bangladesh is immortal.