Rabindranath is a mystery to many. Most of the westerners had an extra curiosity about him because his writings create different stature that was hardly found in their beliefs except in German and British idealism. Eastern idealism particularly Indian spiritual pursuit was very strange to them because western life does not fit with the very trend of it. That is the land what Nirad C. Chaudhuri prefers to call the ‘Continent of Circe’. Dr. A. Aronson, a very well-known occidentalist, in his famous book Rabindranath Through Western Eyes writes in 1943, “Rabindranath personified to the West not only his poetry and message but also India.” Indian thought and ideal are thus very important to the westerners because it expresses oriental culture at its fullest and surest length.

Moreover, Upanishad, centre of all ancient thought, becomes highly influential among eastern trends, which is awfully accepted by many western pundits, including Max Muller. Max Muller was the first European to take a very gigantic task to introduce Indian socio-ethical elongation to the western mind. Tagore represents himself as the best surrogate of the east to them. All thinkers of the West from different disciplines had a considerable interest in him and it grows increasingly with time. Einstein, Russell, Yeats, Pound, Bridges, Sturge Moore, Rhys, Saint-Jhon Perse, along with many others had a personal rapport with Tagore. They discussed and debated a number of issues time and again.

Tagore was much unknown as a poet to the world before 1913, the year he received Nobel Prize from Swedish Academy at the age of 52. His first English book Sadhana: The Realization of Life published by the Macmillan and Company having the same tone of asceticism as Gitanjali had an immense influence on western thought. It was a collection of some essays that mostly had delivered to the American people during his visit in 1912 to a number of universities and institutions. His son and son-in-law had been there in pursuit of higher education in American universities during this time.

Tagore was sent to England for higher education at a tender age but he could hardly manage to stay there with the formal education system that lacks, in his word, ‘pleasure’. Education, he believes, does not proceed without sufficient tools of pathos. His idea about education and human life is different from that of the life of the West. Education, he believes, is the only way to enlighten the heart through the pursuance of nature and its greasiness. For obvious reason, he became a new text of the western mind, a place of new discovery. 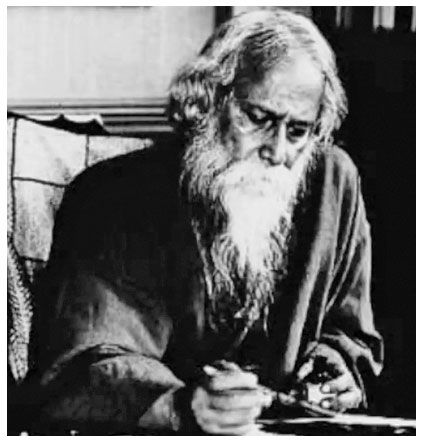 Western people had very poor knowledge of eastern metaphysical poems. They had very few opportunities to have good knowledge on it because no Indian could find their best chance to be acquainted with the West except Michael Madhusudan Dutt before Tagore. But truly Michel represents nothing to the West that surely does carry the meaning of Eastern literary vogue. Instead, Madhusudan wants to be a ‘man of the west’ leaving his own culture and heritage which I believe was praised neither by the people of East nor West.

Tagore’s Gitanjali is perhaps the first book by which the people of England and elsewhere in Europe became aware of a new trend of the ontological form of Indian meditative occultism. It is a song of offerings. It is a song of highly literal composition with a very informal way of meditation. The Morning Post of London writes in 1934 that “Without Tagore, the mysticism of the East would have no appeal for them.” The eternality of human urge to the supreme Lord is almost the same everywhere. The western thirsty mind seeks peace and tranquillity where there were many issues before and after the First World War. Meanwhile, the emergence of Rabindranath Tagore to them was sudden precipitation after a long dryness of dried heart. Alex Aronson writes, “A large number of average Western readers undoubtedly took to Rabindranath because they expected to find his books all the exotic material necessary for their escape from the “realities” of life in Europe both before and after the war.”

For the third time in 1912, Tagore sailed for England with the manuscript of Gitanjali and had an opportunity to meet with an Irish poet W. B. Yeats with the help of an English painter William Rothenstein who was fortunately known to him at Santiniketan. Yeats at first took the script without having very strong knowledge of Indian spiritual thought. Its unbounded sublimity and the style of mediation were fascinating and very rare in European literature. He was rather captivated. On his surprising note he writes, “These lyrics – which are in the original, my Indians tell me, full of subtlety of rhythm, of untranslatable delicates of colour, of metrical invention, display in their thought a world I have dreamed of all my life long.”

In Germany, Tagore becomes popular more than their native poets in the 1920s as he paid visits there thrice in 1921, 1926 and 1930. Rainer Maria Rilke, a poet of Austria-Germany, was in serious domination for a long time in Germany and Poland. People enjoyed his mystical poem with an extraordinary intensity but it is believed that Tagore surpassed his popularity with more insanity. Tagore had several meetings with Einstein over a number of issues, including truth, beauty and reality. It was rather interesting that these two giants had an entirely different position in their respective fields but came very close together through a fascinating debate. Tagore was an anti-realist while Einstein expresses his position as a realist on the question of the independence of objects other than human minds. Music, truth and beauty are the product of the human specified mind, Tagore claims.

On the other hand, Bertrand Russell was critical of Tagore’s infinite reality. They have had some unpleasant moments in London. However, they did not forget to greet each other about their writings. Russell’s essay on religion was highly praised by him that was exposed in his letter to Russell. Tagore became ‘world citizen’ for number of decades. He was a pacifist and an international peacemaker who attempted to appease the belligerent world powers before the Second World War. How much Tagore was in dismay before the Second World War, a booklet Sabhyatar Sangkat ( Crisis of Civilization) written shortly before his death would be a nice example of that.

Rabindranath Tagore criticises nationalism in a very strict sense because he thinks that Indian thought is enriched through the long conglomeration of diverse knowledge that came from the west. In his Nobel lecture in 1921, he says, “West has need of the East as the East has the need of the West, and so the time has come when they should meet.” This is not surprising that he raises his voice against the unjust usurpation of the West and, at the same time, he concedes whatever the good of the West with an open mind. Further, he says in his historical speech, ‘I am glad that I have done some work to give expression to this great age when the East and the West are coming together.”

In 1931, when Tagore was turning around seventy, a book had been published named “The Golden Book of Tagore” to celebrate his septuagenarian birthday. I was quite amused to see that more than a hundred scholars of the West and East expressed their greetings to mark the day that ranges from America to Africa, Asia to Latin America. I felt from my own realisation that how tremendous feelings can be centred on a person!