The cultural arena of the country will observe the 81st death anniversary of Bishwakabi Rabindranath Tagore today in a befitting manner. 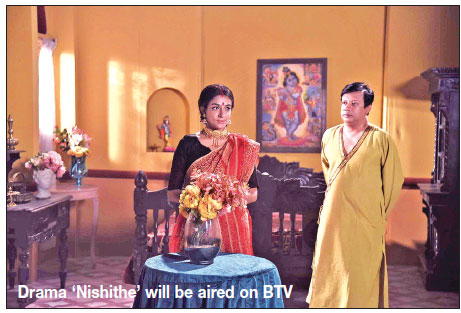 Bangladesh Television (BTV) will air special programmes on the occasion. The programmes include plays, literary, musical and poetry reading.

Channel i will air a special episode of ‘Gaan Diye Suru’ at 7:30 am. Rezwana Choudhury Bannya, Lily Islam, Anima Roy and other artistes of Surer Dharae will perform in the programme.

Banglavision will air a special programme ‘Pran Chai Chakshu Na Chai’ at 6:10pm. Anchored by Shimul Mustafa, Tagore singer Debolina Sur will present as a guest in the programme.

Tagore singer Anima Roy appeared as a guest in the special episode of Banglavision’s regular morning programme ‘Din Pratidin’. Produced by Afia Brishti, the programme will be telecast at 8:30 am.

The youngest of thirteen surviving children, Tagore, nicknamed ‘Rabi’, was born on 25th of Bengali month of Baishakh 1268 (May 7, 1861) in the Jorasanko mansion in Calcutta to Debendranath Tagore and Sarada Devi.

In his long seven decades of endeavors in different genres of Bangla literature, the great poet enriched the Bangla language and literature and elevated their positions in the global arena. 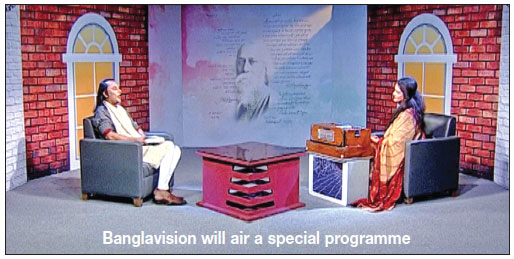 Gitanjali (Song Offerings), Gora (Fair-Faced) and Ghare-Baire (The Home and the World) are his best-known works and his verse- short stories, and novels-were acclaimed-or panned-for their lyricism, colloquialism, naturalism, and unnatural contemplation.

Author of Gitanjali and its “profoundly sensitive, fresh and beautiful verse”, Rabindranath became the first non-European to win the Nobel Prize in Literature in 1913.

His compositions were chosen by two nations as national anthems: Bangladesh’s Amar Shonar Bangla and India’s Jana Gana Mana. The Sri Lankan national anthem was inspired by his work.

The legendary poet of Bangla literature breathed his last in Kolkata on August 7 in 1941, which falls on Sraban 22 of Bangla calendar.