Democracy is a memory: Rahul

The Congress leader released after detention

NEW DELHI: Congress leader Rahul Gandhi on Friday shared visuals of face-off between cops and his party colleagues as the Congress undertook the “Halla Bol'' protest in Delhi and other parts of the country against inflation and a surge in the price of essentials, reports Hindustan Times.

In a tweet, he described the dramatic photographs, saying: “Democracy is a memory”.

Gandhi was detained along with more than 60 MPs soon after he took part in a protest march that was flagged off from Parliament to the President’s house. Top leaders, including Shashi Tharoor and Manish Tewari, were detained.

However, Congress leaders, including Rahul Gandhi and Priyanka Gandhi Vadra, and 65 MPs, were released from police detention at Kingsway Camp in Delhi around 7:00 pm after six hours of their detention. The party said the members of parliament wanted to submit a memo to President Droupadi Murmu on inflation.

The high drama of Friday’s protests was captured in multiple photographs and videos. One of the clips showed Priyanka Gandhi Vadra pushing down a police barricade in the national capital, sitting in the middle of a road to mark the protest. She was removed by cops on duty in no time and also taken away in a police van.

AICC HQ in Delhi where she had joined other leaders and workers of the party in the protest against unemployment and inflation. Another clip showed former Uttarakhand chief minister Harish Rawat being lifted and taken away by cops, also forcibly.

Before the pan-India stir kicked off, Rahul Gandhi had addressed a press briefing in the morning where he alleged that the media was losing freedom under the current government.

In strongly-worded remarks, he also claimed that the institutions were being captured by the RSS.

Later, the BJP’s Ravi Shankar Prasad also held a media briefing and said that the country had lost its freedom in the “Emergency era”. 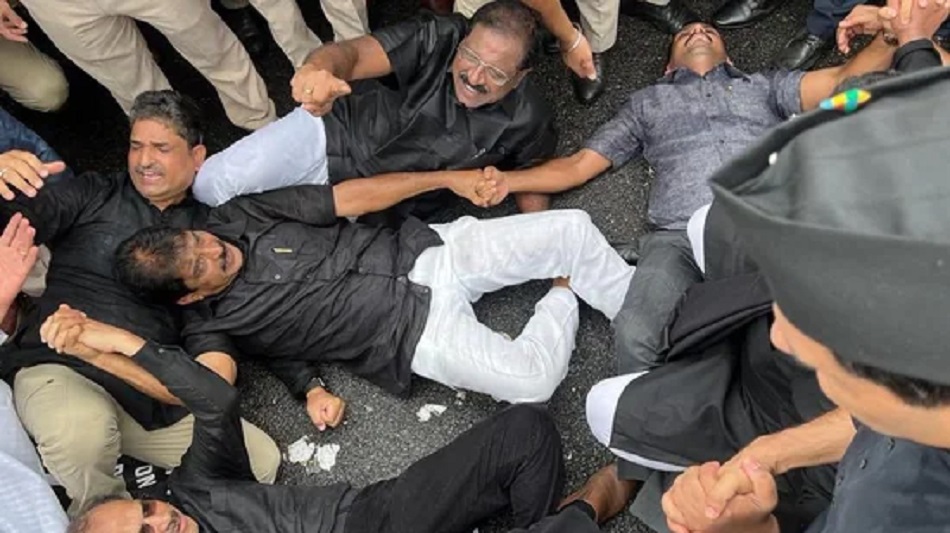