Bangladesh will be looking to complete their third successive T20I series victory over Zimbabwe, this time under new skipper Mosaddek Hossain, when they face the hosts in the series-deciding third match at Harare Sports Club in Harare today.

The match is scheduled to start at 05:00pm (Bangladesh Standard Time) and will be telecast live on T Sports.

The Tigers, who never lost a T20I series against Zimbabwe till the date (three wins and three draws in previous six series), won the previous two series by 2-0 and 2-1 margins in 2020 and 2021 respectively.

This year, Bangladesh started the T20I series in a disappointing manner as they lost the opening game by 17 runs before they bounced back strongly by winning the second game by seven wickets to level the series under Nurul Hasan Sohan’s captaincy. 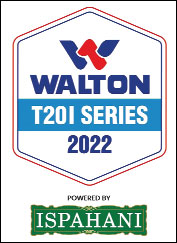 However, Bangladesh suffered a blow when the wicketkeeper-batsman fractured his left index finger while keeping against fast bowler Hasan Mahmud during Sunday’s second T20 international and was ruled out of the remaining part of the Zimbabwe tour.

Nurul departed from Harare to return home on Monday and he will continue his treatment and rehab for the fractured finger for the next three weeks upon his arrival in Bangladesh.

In the absence of Nurul, Mosaddek, who claimed 5-20 in the previous match, was named as the skipper for the series-deciding contest by the Bangladesh Cricket Board on Monday.

However, the BCB surprised many by their second call as they included former T20I skipper Mahmudullah for the third T20I as Nurul’s replacement.

Mahmudullah, who arrived in Zimbabwe a few days back, is part of the Bangladesh ODI squad that will play a three-match series against the hosts at the same venue on August 2, 5 and 7 respectively.

The 36-year-old experienced campaigner was earlier given ‘rest’ for the T20I series against Zimbabwe.

Although he returned to the T20I side just after two matches, he wasn’t provided with the captaincy responsibility and it suggested that the BCB has already made up its mind not to bring Mahmudullah back for the captain’s job.

Meanwhile, Zimbabwe, whose six-match winning streak in this format ended in the last game, will be eyeing to win their first ever T20I series against Bangladesh during the series-deciding match.

Sikandar Raza has been in a brilliant form as he hit back to back fifties and also took two wickets in the opening two games but the others also need to showcase similar performance to help their side win the last encounter.